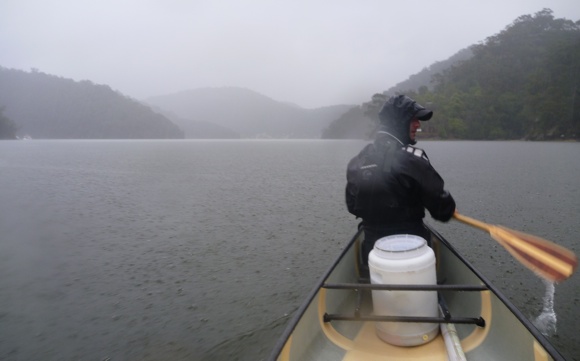 Travis in the bow, looking out through non-stop drenching rain

With the 111km Hawkesbury Canoe Classic now only 4 weeks away, the need to train has become somewhat more urgent. Having been away overseas hasn’t helped either, so when the opportunity arose I wasn’t going to let a little rain get in the way. That being said, “a little” rain turned into “a non-stop downpour”, so we certainly got wetter than we anticipated! Still, Travis and Mikey arrived at Berowra Waters ready for our session – Trav and I in our Wenonah Minnesota II race canoe, and Mike borrowing a Current Designs kevlar kayak. 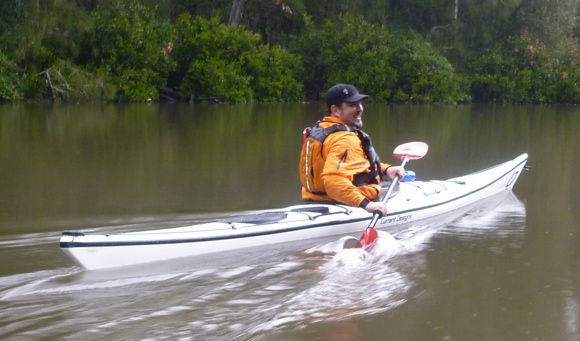 Mike trials the Current Design kayak - fast, light, and a tad tippier than his Tupperware boat

Our plan was simple: paddle up stream as far as the high tide would take us, return to the marina for breakfast, and then paddle downstream for a while before returning home. Mike doomed us to a wet ride when just pushing off he said “I don’t think it’s going to rain, do you?”…. five minutes later the skies opened and rained on us for the rest of the day!

Arrival at the upstream rapids, and a little playing in the canoe amongst the rocks

We cruised upstream until we got to the final rapids and were taken with how fast they were flowing. Usually there is but a small trickle through them, but with all the rain the rapids had taken on a much bigger flow and a decent current through the rocks. Travis and I took a few spins paddling up into the flow, catching the moving water and rushing back down through the rocks for a bit of fun. Then it was back downstream, stopping only to show Mike my favourite rock pool and waterfall on the way.

Mikey points out the waterfall. At higher tide, you can paddle right into the rock pool

...then Travis does his best Mikey impersonation

On arrival back at the marina we indulged in a little egg & bacon goodness, washed down with fresh coffee, before bracing ourselves to head back out into the worsening rain. Then, well and truly drenched, we put in another ten kilometres or so through the worsening storm. 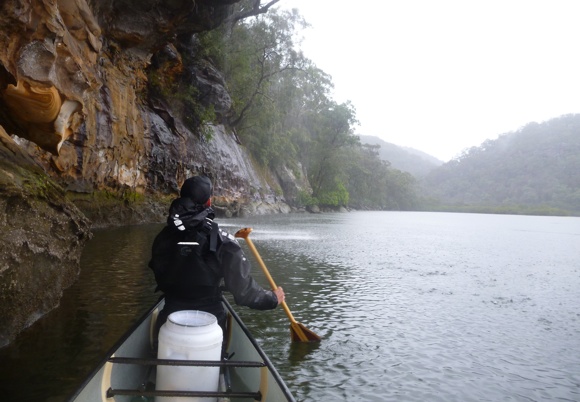 Getting a little respite from the rain under a cliff ledge 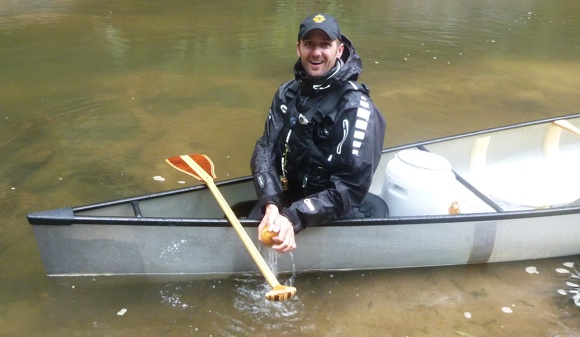 Travis takes a moment to sponge out the slowly filling boat 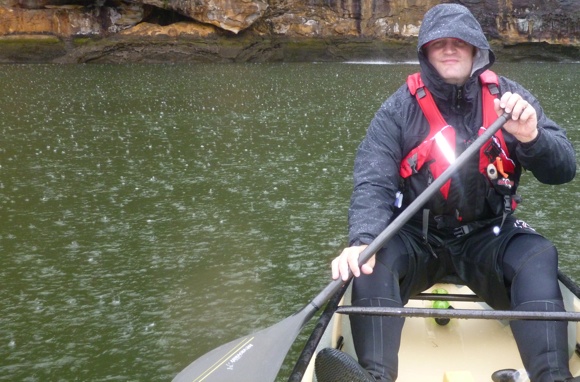 A wet but happy Fat Paddler - any paddle is a good paddle!

It may not have been the best conditions to get out amongst it, but it certainly reminded me of last years Hawkesbury Canoe Classic! As I said to Mike and Travis, better to train in the rain and get used to it than only be fairweather paddlers. Anyway, we still managed to get an egg & bacon roll in along the way – ha! Cheers, FP

The Hawkesbury Canoe Classic raises money for Leukaemia research and is an important charity to support – any donation via my profile page will be greatly appreciated. 🙂

Video Post: Canoeing in the Rain in the Ku-Ring-Gai Chase National Park Australia