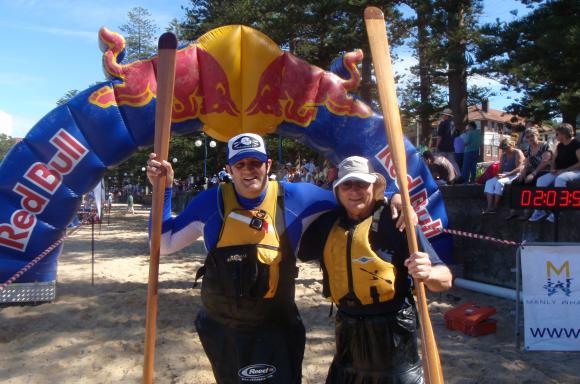 The other day I was thinking about the awesome range of sports that Red Bull sponsors: Air Races, Formula 1, Motorcross, Sky Diving and practically every other extreme sport you can imagine. I thought to myself, wouldn’t it be awesome for kayaking to have a sponsor like Red Bull who put so much into building the awareness and attractiveness of the sports it supports. Then I thought I’d do a quick search on YouTube to see if Red Bull had done anything with kayaking and discovered that not only were they already involved, they were heavily involved at that. So I thought I’d put together a compilation of videos showing how Red Bull is involved in our great sport – hope you enjoy it! [Note: this article is in no way sponsored by Red Bull… but if someone from Red Bull is reading this, Team Fat Paddler would really like some Red Bull white water helmets and a truckload of Red Bull – ha!].

Yes, you read that right….. kayaking not just rapids, but waterfalls, at night. Strap on a bunch of waterproof fluoro lights and go for it!

Can Kayaks Fly? Or at the very least, Bungee?

Why would anyone attach a rubber-band to themselves and throw themselves off a platform 100 feet above the water? I have absolutely no idea!

Speaking of air, how about kayaking a off a ski jump into a canal?

I can definitely see the practical use of this one! It’s really just an extreme seal launch with a backwards pike and a double twist at the end!!

In New Zealand, these Red Bull sponsored fullas built their own rail over a creek for some kayak slide action. I’m not really even sure why, but who am I to question it?

Red Bull is all about extreme sport, and racing down white water certainly has its risks.

Pro-kayaker Ben Brown is somewhat of a white water legend. Big drops, big holes, big water – he loves to experience it all. And he LOVES to do it in New Zealand.

Kayakers that paddle over enormous waterfalls are attempting higher and higher drops, pushing the limits of one of the crazier aspects of our sport. In this movie, these crazies live out their dreams in the quest for higher drops.

What About Europe in Winter? No Problem, Try Snow Paddling!

What do you do if your waterways are frozen solid? If the rivers and creeks and mountains are covered in snow? Well both ice and snow are forms of water anyway – get out and paddle!

Ok, this next one has nothing to do with Red Bull, but it probably should. More snow kayaking, but this time fast downhill paddling on powder. Hell yeah!!

Kayakers on Safari – Paddling the Rivers of Zambia, Africa

There’s still plenty of adventure to be had if you get off the main track. In this third instalment of the series, watch as these pro-kayakers take on amazing white water in the wilds of northern Zambia.

So there you have it, Red Bull really is getting behind the sport of paddling after all, in more ways than I could have possibly imagined. Cheers, FP

Sea Kayaking – Where Are All the Young People?