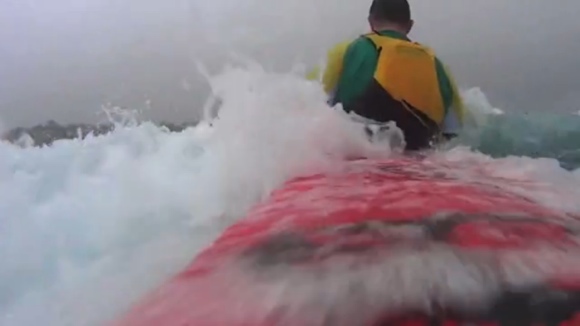 Another early morning at the Bower in Manly. No clean waves though, just heavy swell and storm chop.

Two years ago the northern Australian state of Queensland was battered by torrential rain leading to one of the worst floods in Australian history, with an area the size of France under water. This week Queensland has been hit again as the remnants of Cyclone Oswald brought high winds, more torrential rain and huge ocean surges, leading again to flooding. Then the weather system moved south, bringing storm activity and huge ocean swell down along the NSW coast.

Sydney wasn’t spared the storm, which hit hard during the weekend of Australia Day. My usual Sunday morning paddling session would avoid the worst of it, with 5-6m swell anticipated in the days following, but the smaller 2m swell was still going to make things interesting. As it was, we discovered it’s not just the size that matters, but how rough it is as well, and our normal point break at the Bower was a seething mess of blown out swell, wind-blown chop and general nastiness. 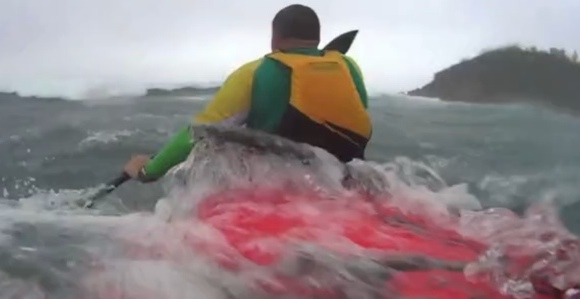 Bouncing around in driving rain, multi-directional chop and rebound.

We didn’t get a great surf session in. Most of the waves we caught dumped vertically to become raging walls of white water. Almost every wave we tried to get ended up throwing us over the falls or pushing us sideways at the front of rumbling walls of froth. We even tried paddling out to sea, where it just got even bigger and rougher with strong winds and driving rain making it hard to see, let alone stay on our skis.

In the end we all spent a great deal of time swimming, remounting, and being knocked back into the water again. But somewhere in there each of us managed one or two good waves, some fast downwind paddling and a little bit of fun before the seas turned absolutely mental later that day. It may not have been our best surf session ever, but anytime in the surf is better than sleeping in and doing nothing! Cheers, FP