This week Brian Partridge, a South Australian member of Team Fat Paddler, got to try out his new Epic V8 for the first time. His thoughts on the V8 are below – Cheers, FP.

What can I say about the new Epic V8 that hasn’t been said by many others in the entire world (the world does revolve around paddling doesn’t it?). If you want to read about all the ins and outs of how I got to the answer, read on.

Unlike all the professional and semi-professional writers/reviewers/paddlers, this ski is designed for me. No, not me personally, but beginner paddlers, with my balance and ability (or lack thereof). I don’t want to hear how some guy with a waist of 17 inches and biceps the size of Bournemouth stepped out of his Stellar SEL Ultra / Fenn Elite SL Glide carbon / UNO Max carbon and paddled a V8 to a record time on the Miller’s Run in 45 knots or out to Balls Pyramid half way to Auckland and back. NO! And unlike most of the other writers, I actually own and race a V8, and yes I had to pay for it myself. My existing Epic V8 is a club model, blue tip, first series. It holds a special place for me as it was the first proper ski I ever bought. It taught me to paddle and it looked after me.

I took my first Epic V8 in my first rough offshore race, the 2011 Four Islands Classic, in which we paddle from the bluff at Victor Harbor to Port Elliott in South Australia. This race was rough – I would not have got 25% of this race done in the V10sport. I did get the race done though and I was the first of the V8/XT type craft home. This is the ski that Gelo paddled in the 2012 Hawkesbury Canoe Classic. This ski was never leaving my ownership – or so I thought.

I’d love to be able to say I paddled the new V8 and traded my original V8 then and there, but it didn’t quite happen like that. I was at work in the Pilbara region when my phone rang. It was Steve Dalton, the SA Epic dealer.

“G’day Brian, I’ve sold your V8 for you”. Hmmmm I smell something fishy, and I’m not talking about the contents of my ex-wife’s apple crumble!

After an hour of research on the web and having read a few articles, the return phone call was made.

“Make it a black tip Steve-o”

Not for the reason of wanting the V8 to be faster, but I was sick of carrying three skis every time I paddled with my daughter and my partner.

So the ski finally arrives, and thanks to Jacqui and Tony at Epic Australia, there was no way this ski was going to be damaged in transit. It had about 6 inches of thick padding wrapped around it. Seriously, it took me 15 minutes to cut the ski free, thanks guys. 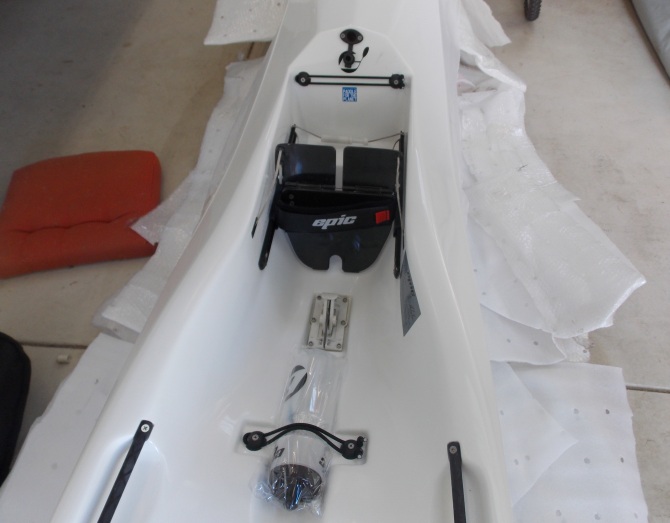 A look into the cockpit of a freshly opened Epic V8

Luckily enough Nat Bradford from Sydney Surfski rings and suggests a family day paddle at the Onkaparinga River. This wasn’t the only ski I picked up that day either – if you had read my last article on the Hayden PR2 Fat Boy, I liked it so much I bought one of those too, so was bringing that down for some fun as well.

We decided to give Nat’s wife Georgia (an absolute beginner) the first paddle on the V8, and she paddled it like a pro. She loved it – comfy, smooth and stable were the words we heard. Great, now get out of my ski and let me paddle it woman!!

WOW, WOW, WOW!!! Is this V8 better than the old one? It’s like comparing the new HSV clubsport to an old HQ Belmont. It’s lighter, it’s faster, it’s easier to carry (with the new added handles in the centre), it even looks better.

And the bailer, the bailer! The old one used a bullet in the floor where you could place a rubber bung in for flat water and then just paddle fast in the waves or accept the inch or two of water that sits in the foot well. The new bailer is so much better – a full cockpit of water will empty through the bailer in about 8 strokes at cruising pace. Amazing!

Design-wise, the volume of the rear tank has been reduced, so the bum will sit lower when surfing or catching runners. The rocker (end to end curvature in the hull) has been reduced to make it faster, and it’s definitely faster, without a doubt. They’ve also added some recessed handles into the seat bucket, which makes carrying the V8 ridiculously easy, and they’ve replaced those hideously ugly tubular metal handles at each end with formed plastic handles, a much better look.

Now, for the bit I didn’t like. The steering. I found that I had to use a lot of pedal to turn this ski. And I mean a lot. However, it’s not all bad, I drilled two holes in the steering bar, closer to the pivot point. This effectively halved the amount of travel needed in the pedals to turn the rudder from full left to full right – winning! 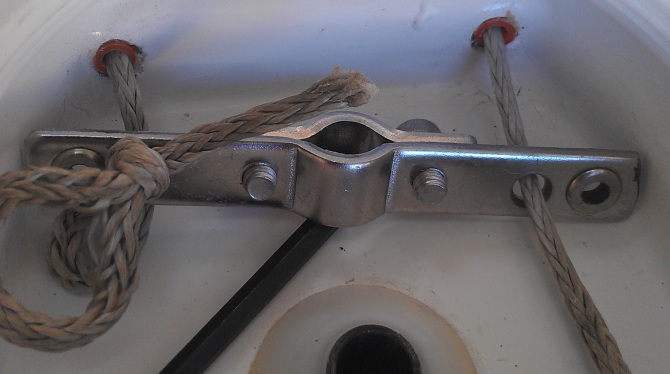 So, after all these design changes, what’s the overall feel? Yes, it’s just as stable as the old one, yes it’s faster on the flat, yes it’s lighter and easier to carry, yes it still has a water bottle recess, yes it accelerates quicker and rides runners easier, and since my little adjustment on the steering arm, it surfs and steers down waves just as easily as the old V8.

I will say the less rocker makes it (ever so slightly) more prone to broach down a wave in the surfzone, but it can’t do everything for you, you WILL have to paddle the ski to make it accelerate. Maybe I’m used to the way my Epic V10 Sport behaves down the face of a wave, but I wouldn’t have ever sat my fat butt into a V10 Sport without paddling an awesome V8 first.

The new Epic drain, this thing seriously SUCKS (the water out of the cockpit)

If you’re a beginner paddler and want to see what all these ski paddlers are on about, get on one! And if you haven’t got one? Get one!