Timbo and I met up at Blues Point a little after 5.30am to start the logistics for competing in the Bridge to Beach event on Sydney Harbour. We had to register, drive two cars to Manly, get our kayaks onto one car, drive back in the one car and find somewhere to park and launch the boats not too far from the start of the event (where hundreds of paddlers were already gathering). 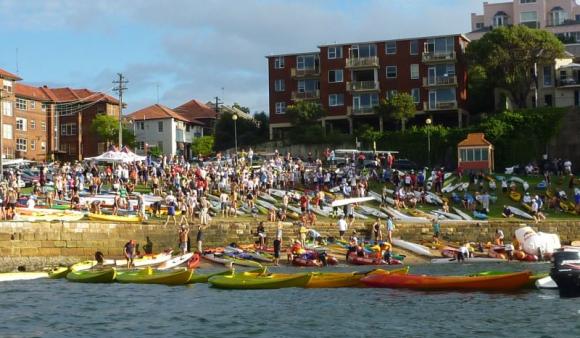 With this logistical task out the way, we paddled a couple of kilometres to Blues Point for the start of the race. First off were the swimmers, a bunch of incredibly fit (and obviously mad) athletes who were going to swim the 11kms through ocean swell and the bullshark-infested waters of the Harbour. To say we felt a great deal of respect for these men and women would be a gross  understatement. 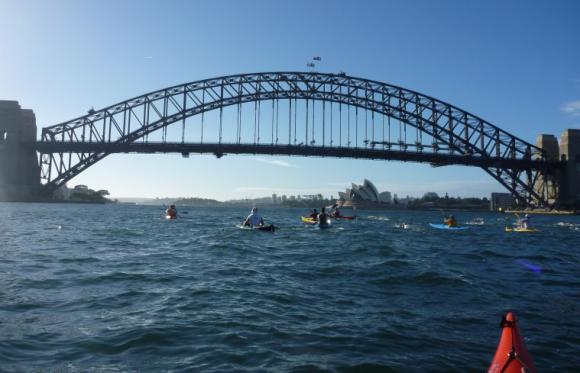 Swimmers and paddler-escorts start the Bridge to Beach

Then the madness of paddler-craft lining up for the rolling start begun, with hundreds of paddlers of various flavours scrambling to get at the front of the line. Paddle craft included ocean skis, sea kayaks, SUPs, surfboards and outrigger canoes, all in various lay-ups and styles. And they all bustled in the pack waiting for the rolling start to get underway, until suddenly the race started and the Harbour was churned up by hundreds of scrambling paddlers bumping into each other as they jostled to get away. 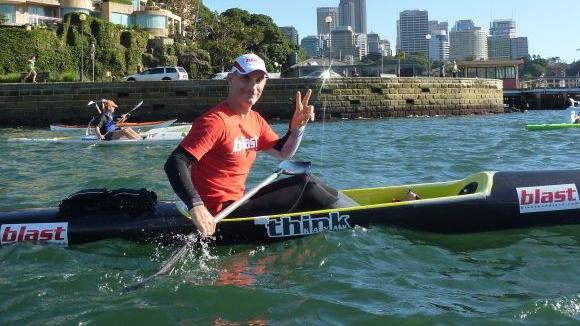 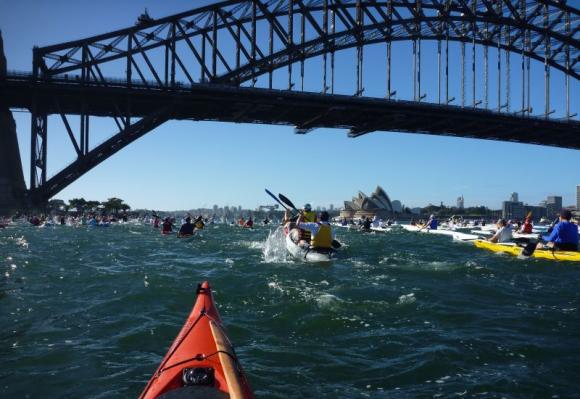 And we're off! Hundreds or paddles churn up the Harbour.

As we all paddled under the Bridge and past the Prime Ministers residence at Kirribilli, one thing became clear – there was going to be wind today, and a lot of it. The weather report had indicated nor-easterly winds between 10-25 knots over the day and increasingly choppy waters, with ocean swell around 2-2.5metres. The race course is 11kms with a constant bearing of north-east, meaning we were going to paddle directly into the wind, and as luck would have it against an incoming tide. Immediately, paddlers start to get knocked out of their craft into the churned up chop.

As Tim and I paddled into the wind we both immediately felt thankful for our Greenland paddles. We could see other paddlers straining into the wind with their opposite blade constantly catching the wind, whilst our paddles were immediately advantageous with their slim profile. We weren’t going that fast (most paddlers were ahead of us) but we were able to steadily paddle away into the headwinds, pausing only to check on swimming paddlers who had fallen in, or to have a muesli bar and some water. We would also pass swimmers, doing it tough in the big chop and ocean swell that was starting to make its way into the Harbour, and couldn’t help but feel massive respect for what they were doing. This was going to be a seriously hard swim, and they plugged away in the churning waters slowly making their way to Manly.

Passing around Bradley Head, the wind, chop and swell intensity increased dramatically. We were now paddling into the full brunt of the wind, with ocean swell now catching us side on, rebound catching us from the other side and chop bouncing the kayaks around like corks. Then to add to the experience, we paddled into the path of sailing maxi-yachts, straining under spinnaker in the massive winds, healing them over to the water and rushing towards us at incredible speeds.

It was also at this point that we started to catch and pass other paddlers. A pretty fast ski paddler, who seemed to have spent more time in the drink than on his ski, admitted he’d never been out in rough water.  He started to slip back behind us, exhausted. Then we caught up with other exhausted paddlers, struggling in the swell as we steadily cruised past with our “funny looking paddles”, as so many described them.

In the big choppy mess our “slow” British skeg boats came into their own. Our better secondary stability kept us charging through the lumps, but also we started to catch the swell coming from behind us with nice little runs past struggling ruddered kayaks. At last we felt like we had some sort of advantage as we paddled past the Heads and on to the home strait to Manly Wharf.

My formative years of competitive sport now flicked the switch in my head that said “chase down those in front to finish before them”. This of course is madness, but something I’ve been afflicted with since I was a kid on a bicycle.  A few hundred metres ahead of me were half a dozen paddlers in Mirages, sleek locally made ruddered kayaks that are usually much faster than my Valley.  The paddlers looked tired, even though the water was flattening out, and I could sense blood in the water. So crouching low, I started a strong rhythmic rotating stroke that picked up my pace considerably, adding to the speed that the little swell runs were giving me.

In the last kilometre, with Tim struggling along behind me, I chased down the Mirages with a few hundred metres to go and paddled hard into the beach at Manly Wharf, where Blast Paddler maestro Dez was waiting camera in hand, cheering me into the finish zone.

Final strokes into the protected beach at Manly Wharf

But of course the race doesn’t finish there, does it. You then have to jump out of your boat (in my case I toppled out sideways into the water with the grace of an elephant seal) and run with your paddle up to the sea wall and along the beach for another 30-40 metres to the finish line. For me, this is no easy task, especially after such a difficult paddle, but with Dez running alongside cheering me on I was able to slowly run through the soft sand towards the finish line. As I got closer to the finish, Tim raced up behind me and then the two of us crossed the line together, Greenland paddles in hand, to the cheers of onlookers gathered close to the big Red Bull gate. 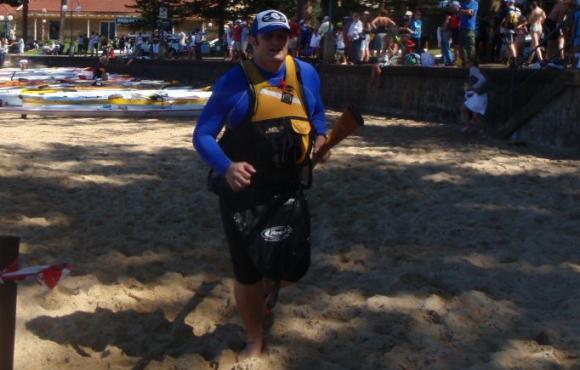 Running in the soft sand... will this event never end?? 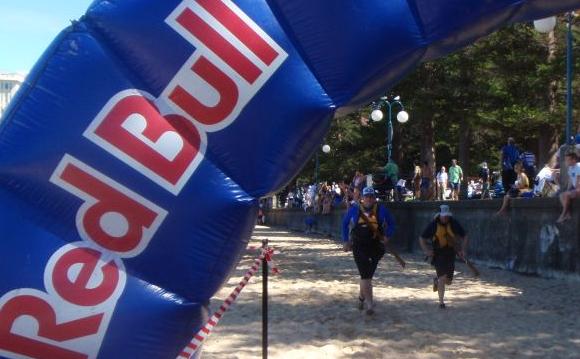 FP chased down by Timbo on the final stretch 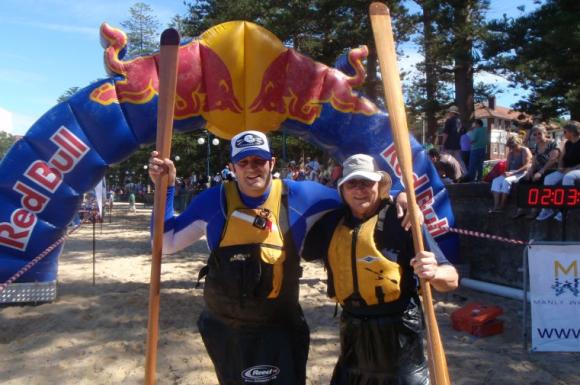 Finishing together in 2hrs 3mins, the Bridge to Beach Greenlander contingent!

I suppose I should have felt ecstatic at this stage, but realistically I just wanted to collapse and vomit. This event was far harder than I had expected, and I staggered over to the drinks table to get some much needed water.  The conditions had been so rough that I had forgotten to hydrate and was suffering badly from heat exhaustion and dehydration (which in fact lasted for the rest of the day/night).

Still, I wanted to hang around for the presentations, so we chatted to other kayakers about the race. One such paddler Mick had just finished it in his new Rockpool kayak, a sexy red glitter and star covered skeg kayak that we had been admiring earlier. In fact it had been its maiden paddle, as he’d only just picked it up the day before, and he was now looking at a paddle back again to his waiting car. 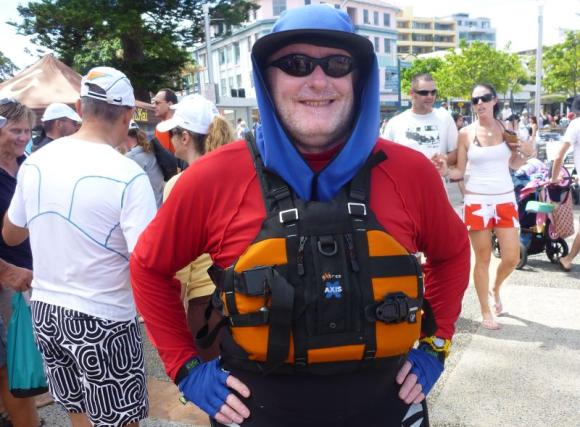 Mick, who came in a little faster than us in his new Rockpool

Finally we watched as all the sporty types (including previous World Champion Ironmen and swim stars) came up to receive their medals for winning their respective classes, before the “random draw” for a bunch of prizes including a Bic Scarpa kayak. And then unbelievably, Timbo’s name got called for the kayak! With Tim not quite registering what had just happened, I had to basically shove him out of the crowd and up to the podium to accept his prize! 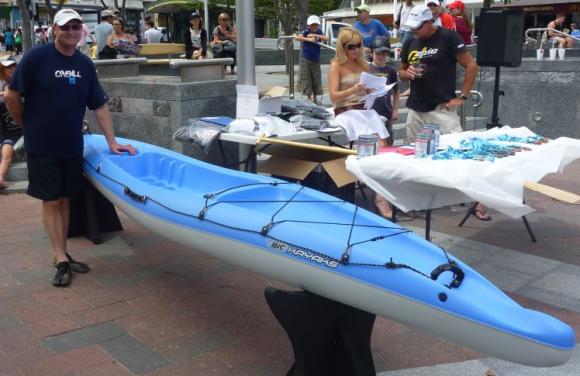 Timbo and his new kayak - haha!

All up a really tough day on the water, but a fair bit of fun and great to be a part of something so competitive. We may not have taken podium places or smashed any records, but we had definitely left our mark on the event.

Last but not least, Team Fat Paddler member and fund-raising champion Ned had decided to take on “PaddleFest” up on Macquarie Lakes, with a 20km paddle in fairly rough conditions and the odd visit by escorting dolphins – nice! Great to see Ned representing the Fat Paddlers up in that part of the world – cheers, FP. 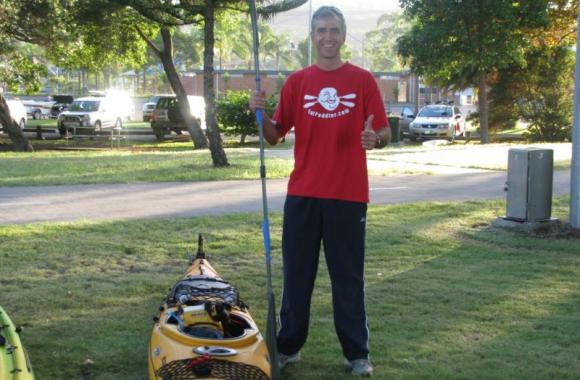