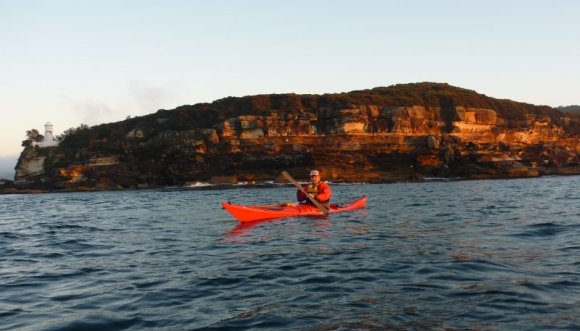 Today after returning from a dawn paddle to the ocean-battered cliffs of North Head, I saw something that really annoyed me. Three kayakers had paddled around Grotto Point (see photo at top of story) heading for Manly. One was in a small Sit On Top, one in a mid-sized sea kayak, and the last in a fairly serious sea kayak setup. What shocked me was that none of the three were wearing a PFD.

Sydney Harbour is to a certain degree similar to the watery environments usually thought of as “sea”. At Grotto Point, the ocean swell rushes through Sydney Heads and smashes straight into its cliffs. It can be so bad, that last winter a good sized yacht was smashed against these cliffs during a storm.

Last week my usual paddle mate Timbo had to come to the aid of some paddlers that ran into trouble off Grotto Point in big swell and had to swim into the beach past the point in big dumping swell. They fortunately had on PFDs  and were able to get to safety despite the rough conditions.

That same day I had come out of my kayak in the middle of a rock garden after getting smashed by rebound. Whilst I recovered my boat/paddle, I was able to bob around in my PFD.

My point here is that very few paddlers plan on coming out of their kayaks, especially in moderate conditions. But that doesn’t mean you wont fall out, or hit your head on rocks and get knocked out. Which is why all kayakers should (and for the most part, do) wear a PFD whenever they are in the water.

Sorry to preach…. but us paddlers have to stick together and look each other. Cheers – FP

14 thoughts on “Dumb Paddlers without PFDs”