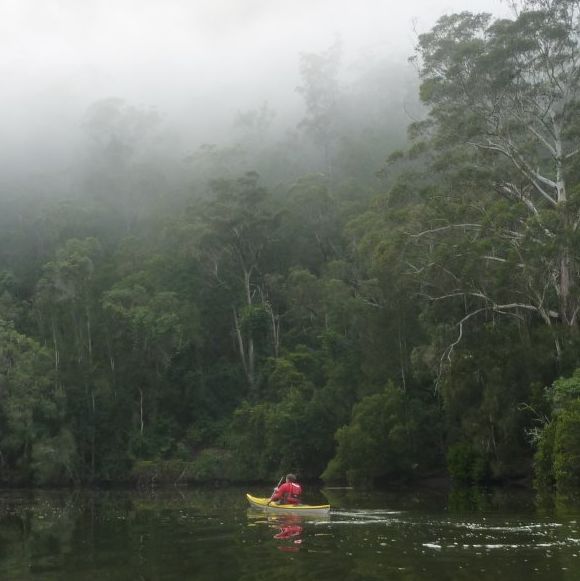 With Grumm having a hard curfew of 11am for his paddling due to kiddie bday party commitments, we decided to go for a very early paddle in the nearby gorge of Berowra Waters. Fortunately we live on the same street, so met out the front of my place just before 5am with the Fatmobile already packed and ready to go. 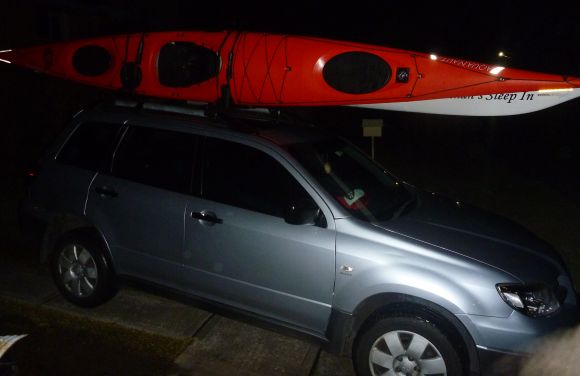 FP's Fatmobile, packed and ready to set off in the darkness

After a short drive through the hills and into the gorge, we unloaded in the darkness at the Berowra Marina boatramp and pushed off into the early morning darkness, heading upstream away from civilisation and into the narrowing Berowra gorge. As the earliest light started to permeate  the night sky, we found ourselves paddling into a thick low fog in complete silence, devoid of the noises of man. 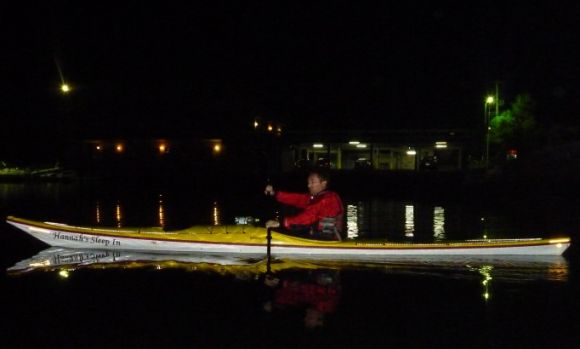 Grumm sets off from the marina in darkness 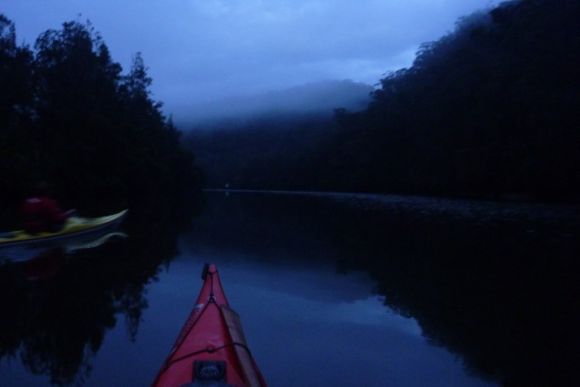 The first sound of the morning was the long gutteral laughter of a newly-awakened kookaburra, obviously telling us off for disturbing the deserted gorge. We continued on however through the meandering waterway, with the only other signs of life being schools of fish erupting in front of our kayaks, skittering across the surface in front of our bows.

As the morning eventually welcomed daylight, we could have a better look at the hills around us. Being the midst of winter, the rain had created deep emerald shades of lush forest and moss-covered rocks along the shore, giving us an almost magical route through the steep hills of the gorge. 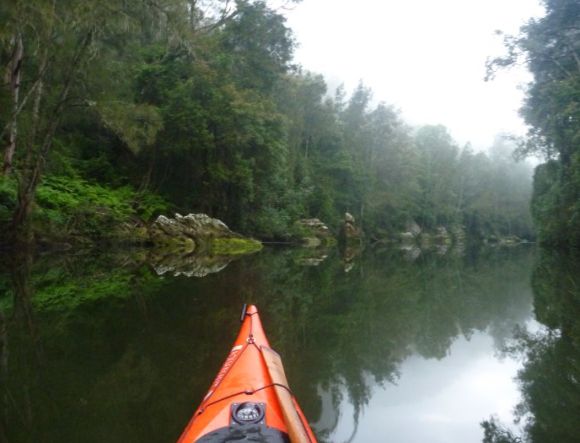 As we paddled the upper reaches of the gorge we spied the occassional hikers tent through the trees. We passed a Scouts campsite, and a community park, before finding ourselves in deeper waters punctuated by huge underwater boulders. This deep still pool gave rise to a rocky ending with a natural weir, with the stream bubbling through from the other side. We’d come to the end. 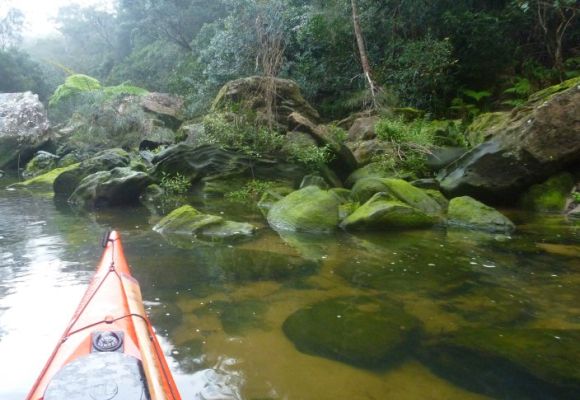 Moss-covered rocks mark the end of our paddle 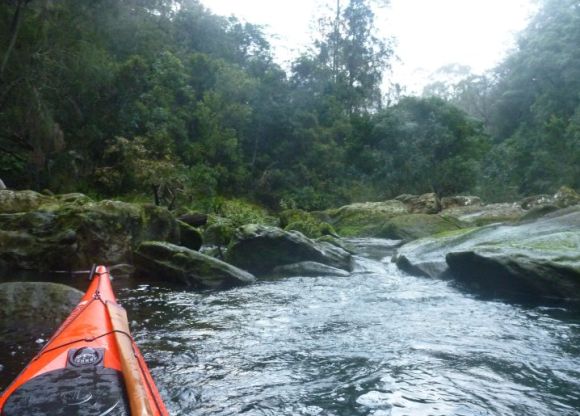 The bubbling "rapids" that finally blocked out path

With that we paused for a muesli bar and some water, whilst taking in the beauty of the still pool and its rock-covered shore. Then we commenced the return paddle, taking in more of the gorge itself now that daylight had well and truly broken. 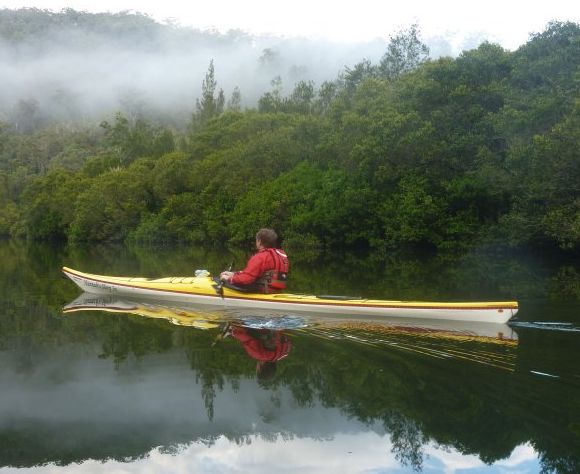 There are worse ways to spend the early morning

Suddenly, the trees above the water erupted and a  Pterodactyl swooped down to  scoop up Grumm, to carry him away to feed its chicks. Well, at least that’s what it looked like, as a huge eagle swooped in over Grumm’s boat before pulling up at the last minute to fly off down the gorge. The serenity of the paddle was briefly broken by the utterance of a couple of surprised expletives, before we both had a laugh and continued on our way. 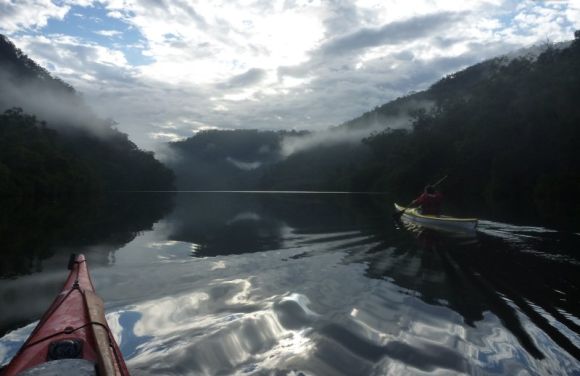 Continuing down the glassy waters of Berowra Gorge.

With only a kilometre to go, we spied a large entrance within an area of mangroves, and debated going over to explore. I’d paddled here many times and figured there’d be nothing to see, but despite my scepticism I suggested we go and explore to round out our paddle. As we entered the mangrove, we found a channel threading its way through the trees, before opening up into a small rocky pool, surrounded by overhanging cliffs, mossy rocks and the steady running of water raining down the sides of the gorge into the pool. Studying the rocks closely, Grumm was able to thread his way into the deeper pool beyond the rocks, so I quickly followed suit. Once in there, there was only one thing for us to do. Paddle under the running water for an early morning shower! 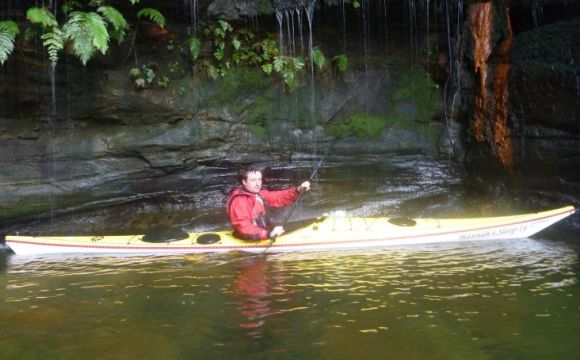 Showering under the ice-cold rainwater stream 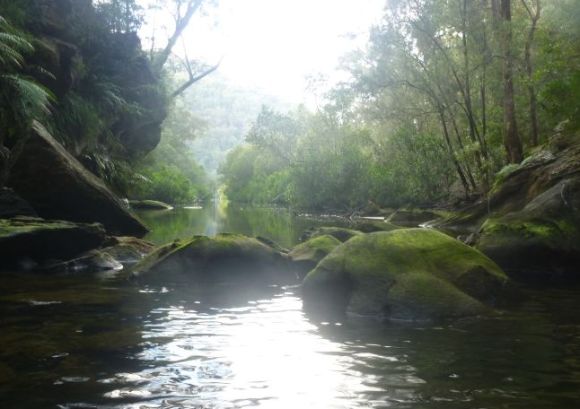 The way into the pool. Very Zen!

With us now both refreshed from the cold shower, we paddled the last kilometre back to the marina before rewarding ourselves with a well-earnt egg & bacon roll and coffee. Despite the paddle not involving surfing, rock gardening or chasing boat wake, the peaceful exploration of the gorge had been incredibly meditative for us both. Cheers – FP 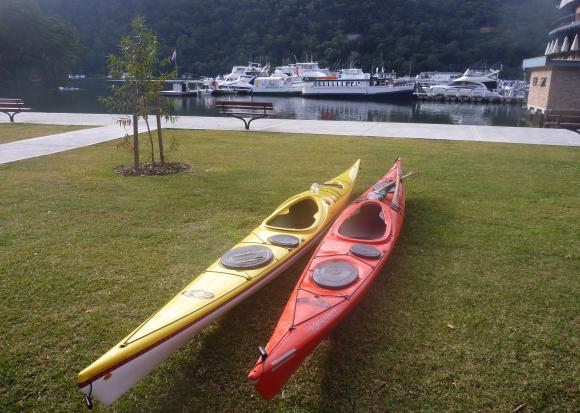 Paddle finished by 10am. A stunning start to the day.