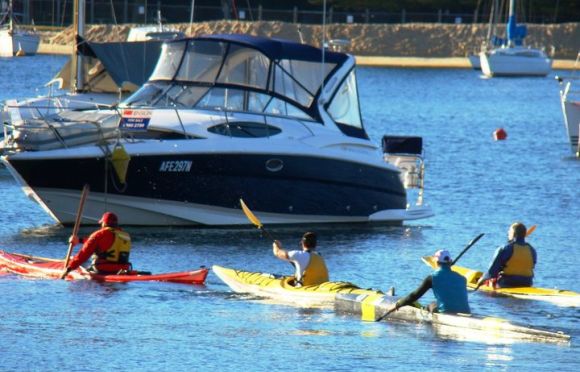 Having done a fair bit of solo paddling over the past few weeks, I thought it might be time to organise an open social paddle. I put the word out looking for first-timers or friends, with a plan to meet at The Spit before a leisurely paddle up Middle Harbour. 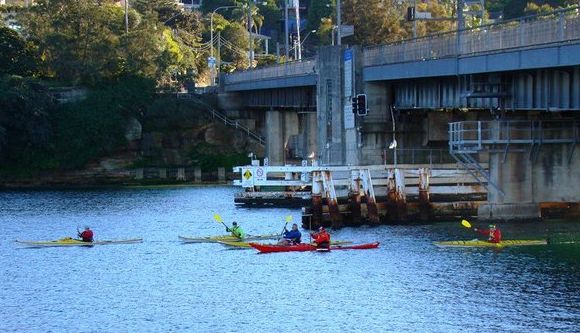 The social set making their way under The Spit Bridge

Grumm turned up with Gavin, a mate of his from the old country.  A colleague from my work, Gelo, turned up. A reader of the site who I hadn’t met before (Mark) arrived on his Vespa. And Blast Paddlers personality Dez Blanchfield turned up with his carbon fibre racing ski. Finally, a bloke we met on the beach, Ian (who had hired an OZFlyte ski for a test paddle), took up an impromptu invite  to join us as well. The seven of us then lined up our respective kayaks and skis on the beach, and paddled north into Middle Harbour. 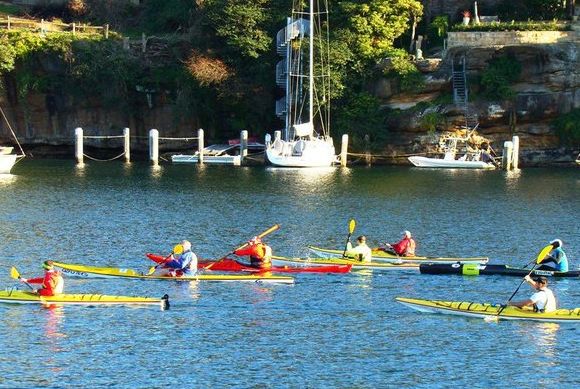 The FP Paddle Gang... that's how we roll, baby!

Watching Dezzy cruising on his 6.5 metre Think Uno racing ski, I thought about how he might go with a Greenland paddle.  So I convinced him to swap paddles for a bit, me fumbling with his carbon wing paddle, and him trying to get a handle on my traditional hand-carved wooden Adanac Paddle. It was an incredible sight, the mix of cutting edge carbon ski with a traditional Inuit paddle! 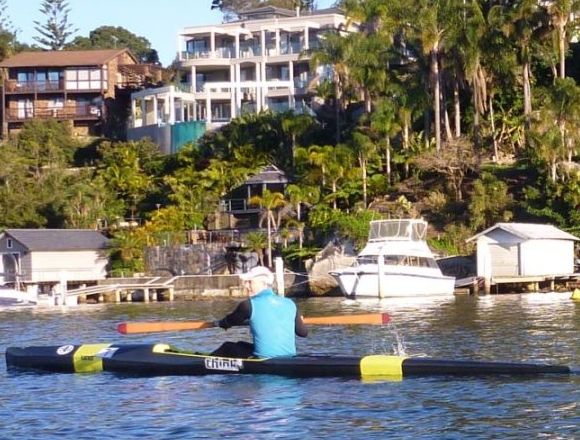 We eventually returned each others paddles and continued with the group up to Sugar Loaf Bay, where we anticipated meeting Garry in his coffee boat. Unfortunately he didn’t turn up, so after waiting a little while we made the decision to head into Scotts Creek and try to find Garry later. 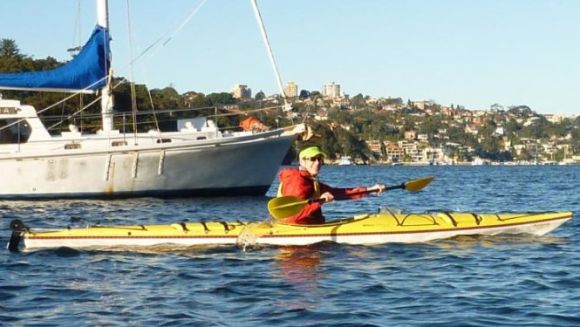 Mark traded in his usual Sit On Top for a sea kayak. Not sure about the lime visor though??

For those of us in kayaks, the narrow confines of Scotts Creek are usually pretty easy to negotiate. You’d expect the boys in long skis to have problems, but not the kayakers. Except for Gelo of course, who someone managed to wedge his boat into a tree. 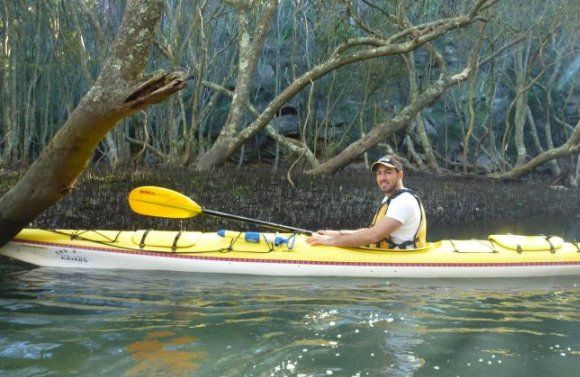 As the creek narrowed at the half way mark, Dez decided he couldn’t really take his ski much further and chose to turn around. Watching a 6.5m ski trying to turn in a creek about 6.3m wide is pretty damn funny, and for a few moments it looked like Dez was going to wobble enough to end up swimming. But after a perfectly executed 120-point turn, he eventually got his ski around and waving goodbye, head off back to the The Spit. 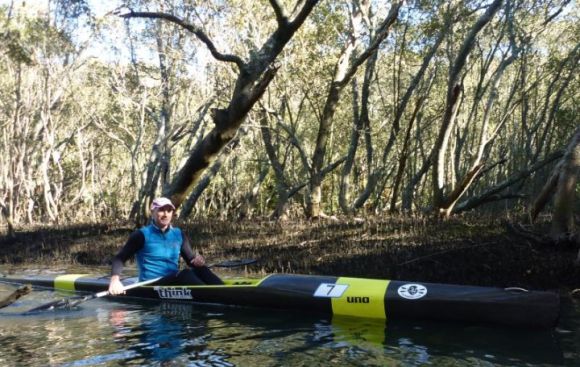 Seeya Dez, get that bloody huge ski out of this creek!

The rest of us continued up the creek until it bottomed out, so we each turned our kayaks around to head back out. Except Gelo of course, who again managed to get wedged sideways across the creek! Grumm and I had to use both our kayaks to push and pull him around until eventually he was facing the right way. 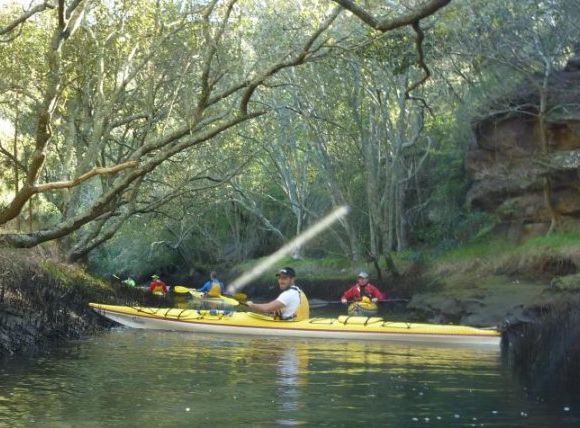 The paddle back out was uneventful and as we returned to Sugar Loaf Bay we caught up with Garry for the long-awaited coffees. Rafting up, we all had a chat and enjoyed the beautiful Sydney morning as we sipped our coffee, before splitting up again for the final paddle back to The Spit. 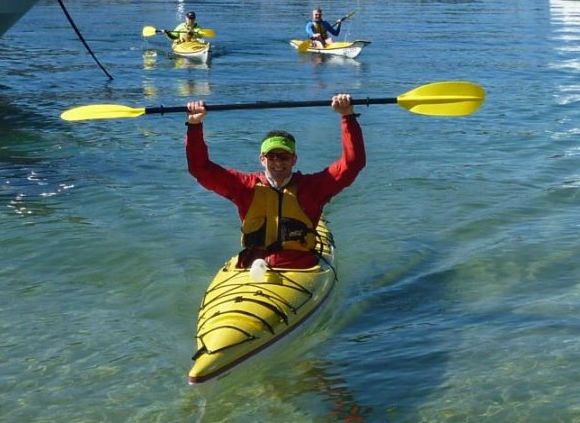 A triumphant Mark at the end of the paddle. Still not sure about that visor!! 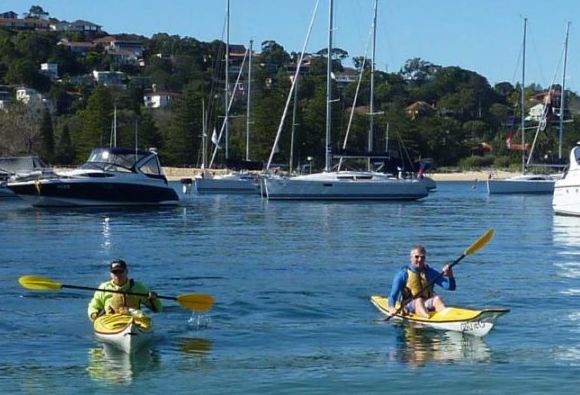 Gavin and Ian rolling in to The Spit 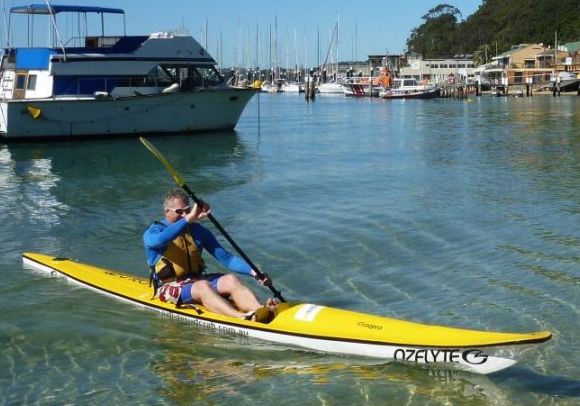 Ian... got to see a bit more of the Harbour than a just your average paddle!

With a few new friends made, we all grabbed a final coffee and enjoyed the sun and the beach out the front of Sydney Harbour Kayaks. All up a lovely little tour of Middle Harbour, and a few new lads with the paddling bug.  Cheers – FP

P.s. Thanks to Shannon from Sydney Harbour Kayaks for some of the photos!