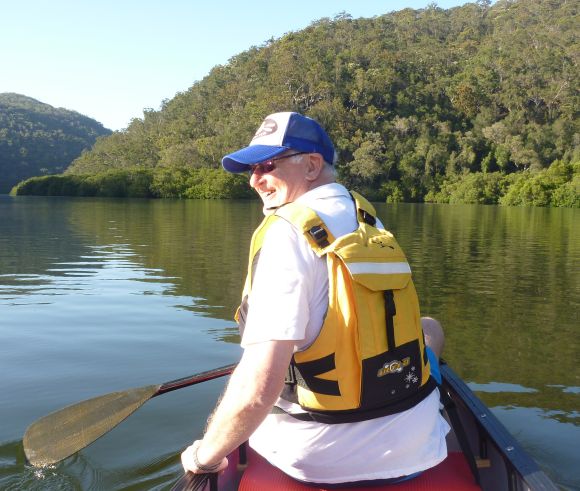 Paddle mate Grumm has had his outlaws visiting from the UK over the past few weeks, and we promised to take Keith, his 6’5″ ex-rugby player father in law, out on the water for an early morning paddle. Keith has a few old niggly injuries, not to mention a new stainless steel knee, so I decided the canoe would be the easiest boat for him to get in and out of. 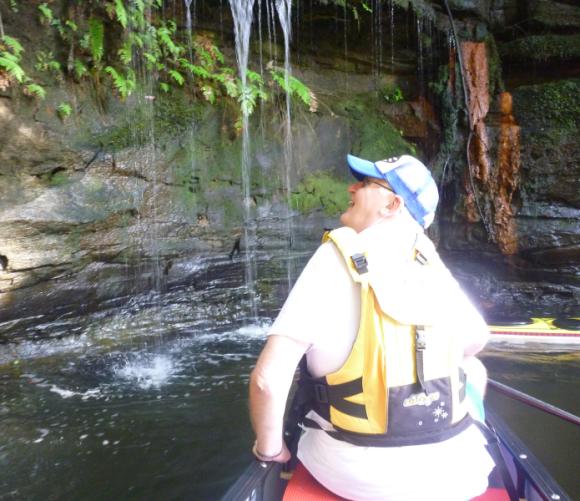 Putting in at the Berowra Waters boat ramp, we paddled up into the gorge through the early morning mist, finally arriving at our first “checkpoint”, the secret rockpool. This amazing place is hidden at the back of a mangrove zone, and contains a deep rockpool covered on three sides by steep walls and moss, with an entrance guarded by big slippery rocks. At high tide you can just squeeze your boat in between the rocks, and Grumm and I had come here before to shower under the waterfalls fed by run-off from the surrounding hills.

Grumm himself was feeling the pain from one or two wines the night before and was keen to get under the waterfall to clear his head.  As he drifted away to wipe the water from his face, he uttered a couple of rich expletives as we heard a “kaplonk” sound next to his kayak. As fate would have it, I was taking photos at that exact moment! 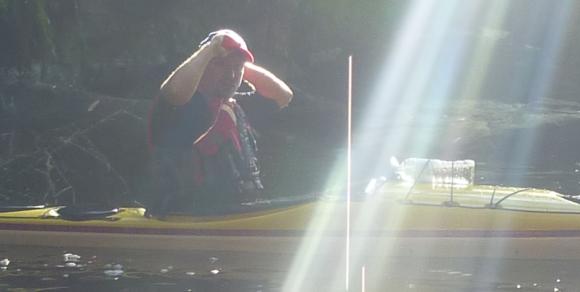 The face of a man who has just dropped something expensive overboard!

When we asked what was wrong, he muttered that he’d just dropped his sunglasses into the pool. My immediate laughter died away however when he told us they were worth over $300 – not an amount you can ignore and paddle away from.  There was no way for him to safely exit and re-enter his sea kayak in the rockpool area however, so I offered the only option that seemed available – I’d go in after them for him and then climb back into the canoe.

Of course, despite his promise that the sunglasses were in only 3 feet of water, the water between where the sunnies were and where I was standing was more like 15 feet deep, and I realised I’d was going to have to swim across to him to help. Resigned to my fate, I stripped off and slid into the frigid waters.

I can't believe I'm bloody doing this. I'm going to have to take it all off, aren't I?

Ok, where are they? Just here? Ok, prepare to dive!

Sunglasses recovered! Now I'm going to take a second to reflect on how COLD it is!!

With the sunglasses now successfully saved, I climbed back up the rocks and slipped back into my shirt and PFD before climbing back aboard the canoe. Grumm took one last pass under the waterfalls, then we all manouvered our boats back out through the rocks and into the channel away from the pool. 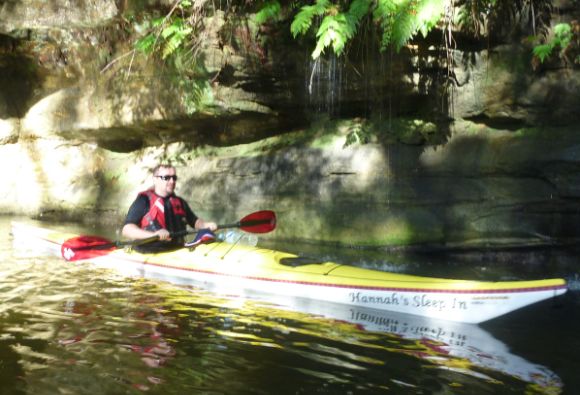 I was feeling pretty chilly so I paddled us over to another little creek where I knew there was access to a clearing. Pulling our boats in, I helped Keith out of the canoe before taking out the Trangia and a few folding chairs and preparing cups of tea for us all. 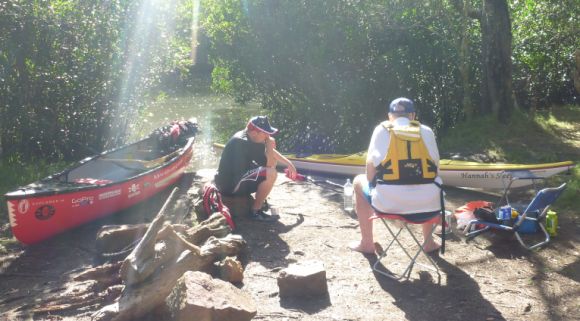 A very civilized way to take a break. Gotta love the stowage capacity of the canoe! 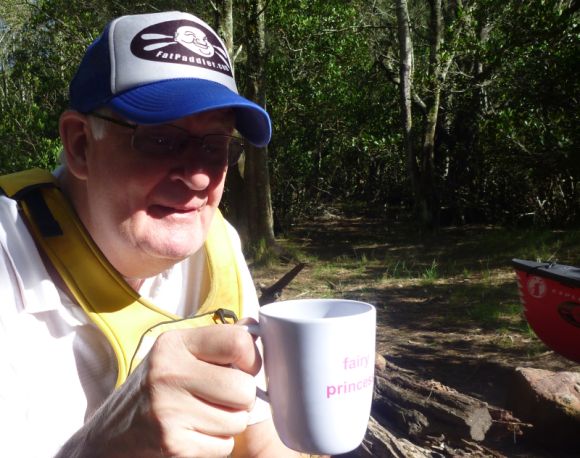 Keith gets the honour of using the Fairy Princess cup. He is English after all...

With bellies full of hot tea we realised there was only one thing missing. Egg and bacon rolls. So we packed up the boats and pushed off heading back to the Berowra Marina and its water-side café.

With Keith having some pretty significant injuries to deal with, exploring such a beautiful outdoors area would not have been possible without the right equipment and craft. But he was able to use the canoe and get outdoors for a stunning morning amongst some lush Aussie bushland – a wonderful experience for any visitor to our shores. Add in a little swimming adventure and you’ve got a heap of fun to boot! Cheers – FP

One great reason why kayaking is better than swimming