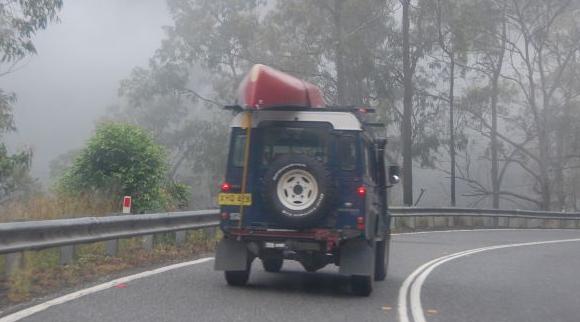 Trekking into the Upper Colo region with a bunch of canoes

The week had been wet and the Upper Colo River to Sydney’s north west had gone from around a metre deep to over 10 metres deep in a matter of days. I’d been chatting to a fellow canoe paddler about getting out in our open boats for a paddle and we decided to head up to the flooded Upper Colo region with another canoe fan to get a little white water. Of course when we arrived the river was in full flood and rushing through the valley at a huge rate of knots. To say I was nervous was an understatement – this was a huge flood zone moving at incredible speeds, and I’m not exactly experienced in white-water. 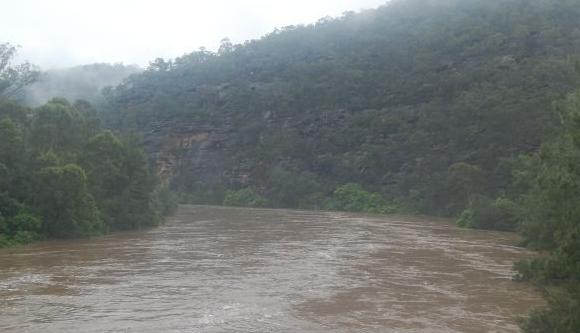 Looking downstream - a whole heap of water disappearing into the valley

Still, we were here and ready to paddle so we set out in the canoes into the adjacent flooded lands. We had a quick poke into the edge of the river just to watch it rushing past, before ducking back in to explore the nearby flooded roads and farms in the valley.

Gelo & FP paddling the moving water in the nearby flooded areas

The next few hours were spent rescuing a stranded horse, an emotional and difficult job made tougher by the horses exhausted state and the difficulty of working in the flood waters. Once that was finished however we had a new job, as we’d been hailed by a group of Korean locals who were also stranded by the rising flood waters. Using our three canoes, we were able to ferry them across some of the water and then once we paddled through a difficult section of moving water, ferry them the rest of the way to their property a couple of kilometres up the valley. 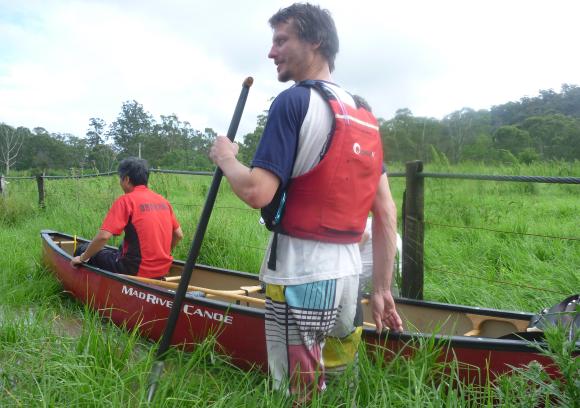 Chris loads up a couple of stranded locals into his canoe 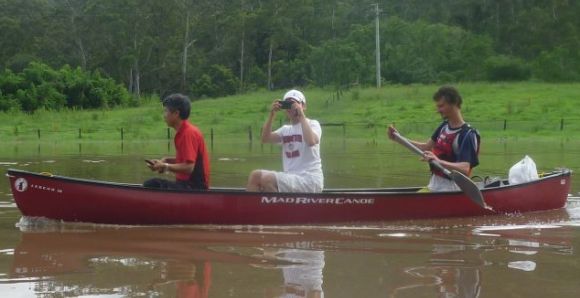 Of course despite the rescues, the flood was an amazing spectacle to see. We were travelling over roads that were metres underwater, and the damage was looking to be extensive.  Street signs were barely visible and what was above the water line was becoming a refuge for spiders and insects escaping the rising waters.

Oops! Didn't quite make it to higher ground in time. 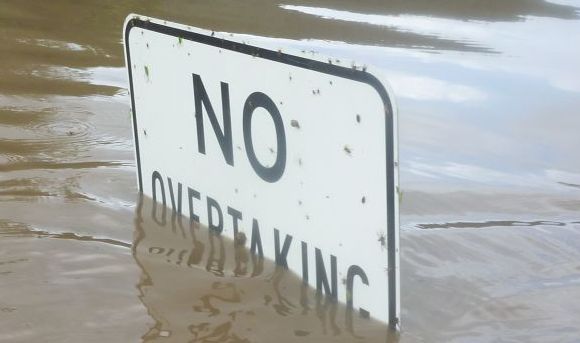 No Overtaking. Now only good for spider refuge! 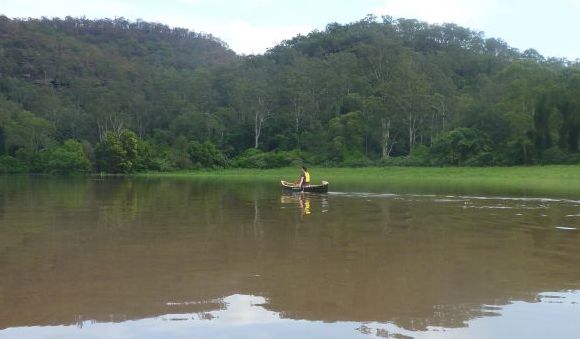 So much water, so few roads...

When we finally arrived at our Korean friend’s property they invited us in for tea to say thanks. Over tea they showed us incredible videos of them demonstrating their martial art of preference – horseback archery!  Gelo and I looked at each other incredulously at how the day was progressing – floods, horse rescues, people rescues and now tea and archery – it was truly an odd aventure we were having!

When we finished our tea we thanked our hosts and returned to our canoes. Paddling back out through the flood waters, we explored the flooded area and generally mucked about in our boats.

The lads playing in their Mad River Canoes 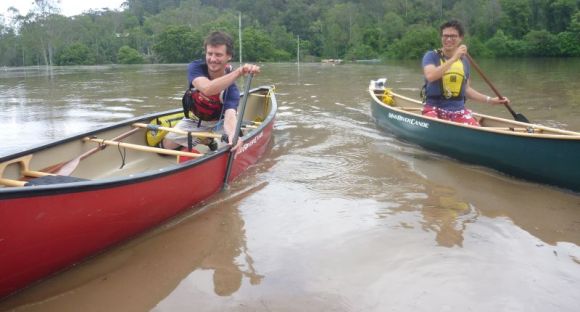 On the way back the lads in their white water canoes were keen to have a crack at the river itself. We were on the wrong side of a spit of land so the lads decided they’d portage their canoes over it and come down with the rushing water. Gelo and I decided we’d take the safe way back and then pull up on the edge of the river to watch them come down and take video – and come down in the rushing water they did!

Then of course Gelo and I had our turn, taking the far safer route down the bank of the river and into the flooded carpark!

And with that, we all pulled in and packed up our boats, laughing at the strange morning we’d had and how great it is that paddling offers so much unexpected adventure. Gelo and I thanked our new canoe mates and head off back to Sydney.

All three Mad River Canoes were purchased at Blue Earth Paddle Sports – if you’re interested in getting into a quality open canoe then drop into their Drummoyne store for a chat. Cheers – FP

2 thoughts on “Canoeing the Upper Colo River in Flood”