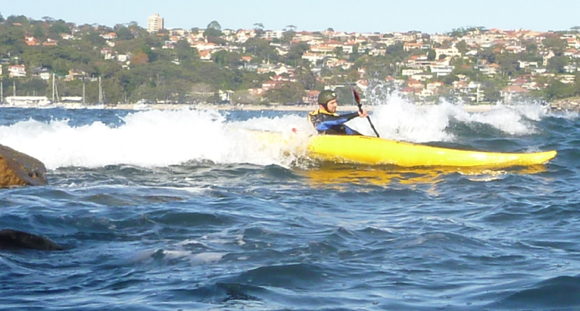 Lt. Gelo catches his first ever wave in a kayak. Nice!

Beautiful weather called for an early morning paddle, with Lt. Gelo and I both keen to get amongst the rocks. After a quick paddle from Sydney Harbour Kayaks to Grotto Point Reserve we discovered swell of between 1.5 and 2.5 metres hammering the cliff during a low tide.  We paused and scouted out the area, looking for possible areas to get into the cliff areas and importantly areas to get back out, but came to the conclusion that the conditions were simply too dangerous for a pair of rock-gardening beginners to handle. Instead we decided to head back to Grotto Point where the tail edge of the swell was creating a nice little left hander breaking across rocks.

Neither of us are skilled as kayak surfers, but we did have wetsuits and helmets on so we weren’t too concerned about the rocks. The best bet was to get amongst it and see how we handled it, which is exactly what we did. Over the following few hours we practiced paddling through the break and across the rocks, and then slowly worked our way up to catching waves back in across the rocky point. Here’s a little taste of the fun we had!

Of course surfing across and through rocks has its risks. I put several dozen new scars into the bottom of my kayak, and a few more dings in my paddle. I slashed my finger open on some barnacles during a failed attempt at a seal landing on some rocks (which was funny in itself!). Regardless, both Lt. Gelo and I felt it was possibly one of the most fun sessions we’d had with a paddle since we started. Sometimes you just have to give it a go and see what happens – maybe we’ll see you on the water! Cheers – FP.

10 thoughts on “Video: Rock Surfing with FP and Gelo”