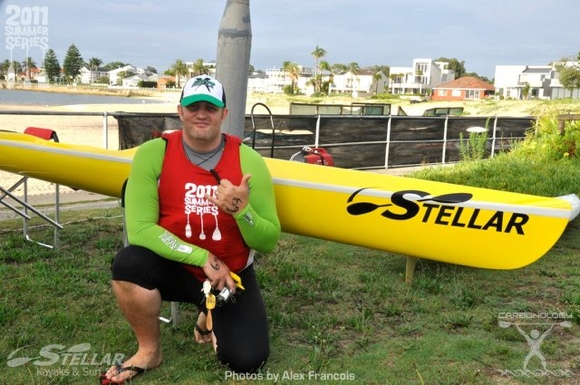 The start of 2012 has been surreal. I’ve gone from tentatively sitting on a surf ski for the first time, barely able to stay on in completely glassy waters, to rolling up to a surf ski race on Botany Bay four weeks later with a  secret hope that I stay on at least long enough to limp over the finish line. During that time I’ve trained zealously in the gym, everyday, in the hope that diminishing weight and a stronger core accelerate my ability to paddle the long white rocket currently sitting in my garage. 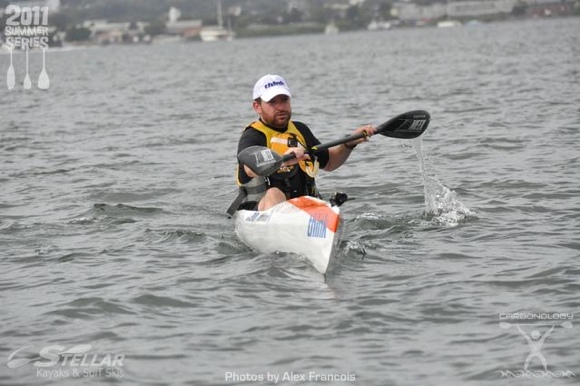 Nat finishes up strongly on his Think Evo. One day I'll beat him, just you watch.

To be honest though, the Stellar SR surf ski I’ve been using (thanks Slipstream Surf) is pretty stable in the surf ski scheme of things. It’s design is great for entry to intermediate level paddlers as it has great secondary stability (for a ski). But there’s still a certain amount of paddler stability that needs to be finessed before taking it out in anything lumpy (unless you like swimming) so the onus has been on me to get myself more “ski ready”. 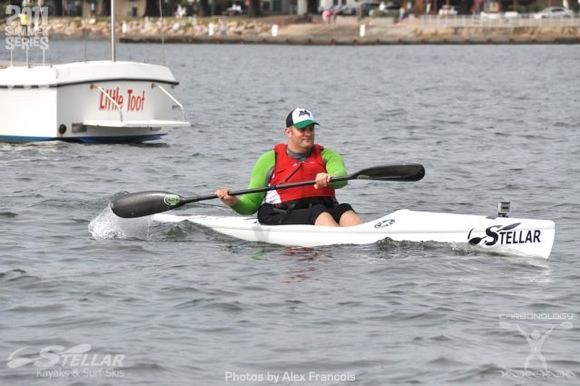 So I’ve been training. A lot. Daily routines of cardio and core strength exercises, backed up with a nutritional plan put together by Benefit Active. Since I started training 6 weeks ago (ie two weeks before I got on the ski) I’ve lost 14 kgs / 30 lbs. This is a substantial amount of weight to lose in such a short period of time, but I’m doing it healthily. Great food, lots of exercise, carefully planned by fitness professionals. 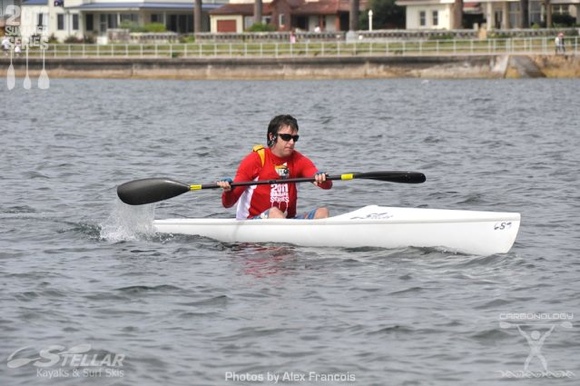 Of course, all that is irrelevant when it comes to racing. Botany Bay is protected from the ocean but it does get wind-blown lumps and swell squeezing in from outside. The water was certainly dynamic enough to have me worried, but I didn’t want to let on to my fellow Team Fat Paddler members so I forced a smile and off I went. Fortunately fellow TFPer Mogo had borrowed a Stellar SR ski from Slipstream Surf that morning as well so I wasn’t alone in my stability nerves. 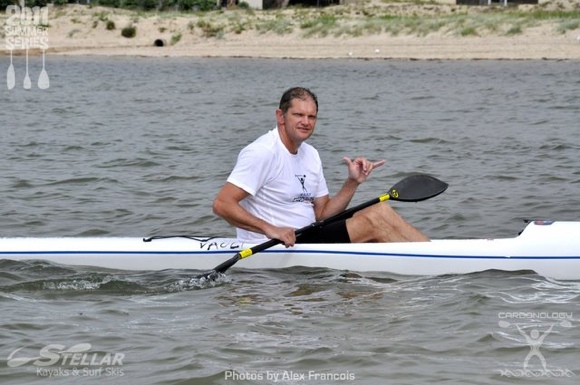 Malcolm from Carbonology Australia gave us all awesome on-water support and advice. Legend!

To say I was slow is an understatement. For the first 1-2 kms I took it very slowly, keeping my rhythm steady and cadence slow as I concentrated on keeping the boat stable. Mogo started falling out a bit and as other TFP paddlers went to his aid, I found myself alone in growing chop and swell. I had catchable waves hitting me from behind and at a 45 degree angle, so I zig-zagged through it to enable me to gain the benefit of any runners I could catch. 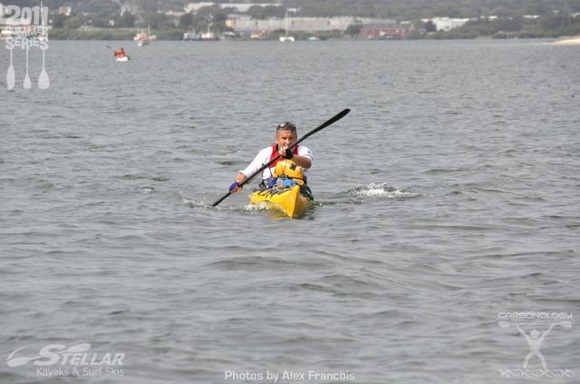 In the TFP kayak (male) division, The Riddler flies into the finish and a podium place

In the TFP kayak (female) division, Series leader Meg wins another race in her division!

The acceleration on waves was intoxicating, the spray kicking up around me as I desperately fought to keep myself in the boat. Sometimes I’d dip a gunwale into a wave and the cockpit would instantly fill with water, reminding me of Nat’s submarine video on Sydney Harbour, but the gurgling venturi quickly emptied out the water and everything was fine. As I wobbled my way through the chop, I noticed a funny thing. I started to smile, a big heartfelt “THIS IS FUN” kinda smile. Much like the rush of surfing through rocks or bouncing around in whitewater. 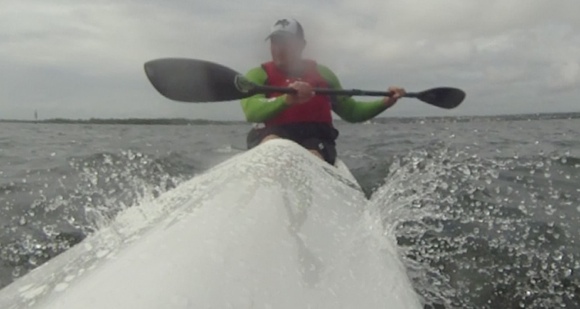 Footage from the GoPro. Running the lumps, hell yeah!

As the race went on I kept learning about how the ski reacted to different lump shapes and changing wind conditions. I managed to assist another paddler who’d fallen out, turn the buoy and then battle on through the headwind and side chop back to the start. By now my stability had really kicked in, I’d worked out how to build stability via acceleration, and was genuinely loving the bumpy ride on the return leg. When I started I had no idea what I’d think of this surf ski stuff, but suddenly now I could see why it’s growing as a sport so rapidly. The sensation of racing through lumps on a sleek boat is truly awesome. 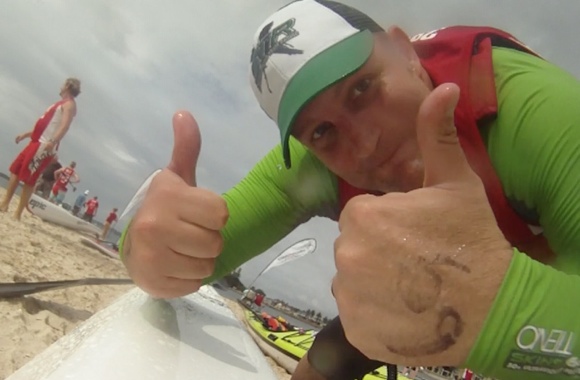 Winners are grinners... and we're all winners in our own way!

Needless to say I didn’t win. In fact I wasn’t even in the middle pack – I came into the beach at the finish with only two skis behind me. But to me it was a big win, because in just four weeks I’d managed to somehow race the surf ski in a few lumps without falling out AND actually finish. I’d learnt a heap about the boat, and about how to stabilise through keeping my body relaxed and my speed up. Sure, I have a ridiculous amount still to learn and a huge range of skills to pick up, but they’ll be future wins I can work towards. For now, I’ll be happy with the finish and use the success as motivation to keep up the training. Cheers – FP 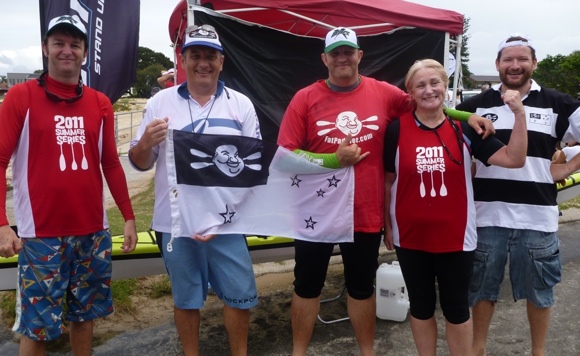 Special thanks: Gavin and Slipstream Surf for the use of his Stellar SR surf skis, Malcolm and Carbonology Australia for the use of the carbon wing paddles and for his care and advice on the water, Dez and the Blast Paddlers crew for putting on the Summer Series, Alex Francois for the use of his photos from the event, and of course to my Team Fat Paddler members who make all my paddling experiences awesome.