The F1 Skin on Frame kayak – amazingly nimble and fast for such an ugly boat!

I had the pleasure of catching up with Tom Nicholson of Elver Paddles this past week, who was in town catching up with family for Christmas. Tom recently slaved over my new Aleut paddle and also made the Greenland paddle I used for the 2009 Hawkesbury Canoe Classic – two beautiful and functional traditional paddles that I rate very highly amongst my quiver.

Tom had brought with him his F1 Skin On Frame kayak, a seemingly wide, squat ugly beast of a boat that I for some reason felt a certain kinship with. I had brought the Stellar SR and was about to test her amongst the waterski boat wake of upper Middle Harbour, a test that would ensure I’d get wet later in the day.

The Stellar SR on top of the Fat Mobile. So long, so white, so skinny. Unlike me!

We paddled out from the Roseville canoe ramp and head downstream. I was astounded at how fast Tom could get his F1 to move – for an ugly fat bastard the thing could seriously move! Whilst we paddled we discussed our thoughts on the Aleut paddle as well as comparing it to the normal Greenland paddles that Tom makes, which was great because I needed something to take my mind off the fact I was really struggling to stay on the surfski in the confused wake of the mad waterski boats around us! 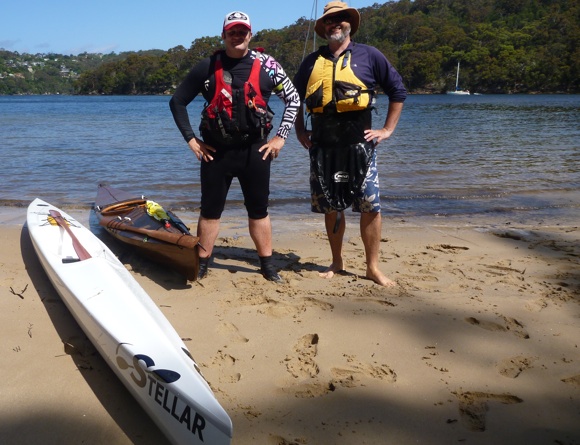 FP and Tom with their respective boats on a protected Middle Harbour beach. Time to swap!

We pulled into a beach and swapped boats – Tom now on the Stellar with the Aleut paddle, and myself squeezed into his F1 and using a carbon fibre Northern Light Greenland Paddle that Tom is now repping here in Australia. The boat felt incredible, fast and nimble with defined chines that bit into the water and made it a heap of fun to paddle. Likewise the carbon Greenland paddle was a pleasure to use, lightweight and strong and easy to wield. 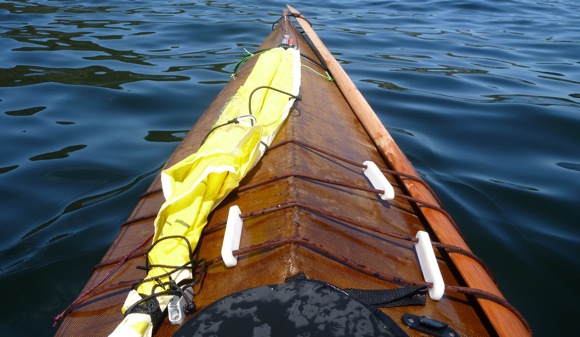 Tom meanwhile was having a blast in the Stellar SR, flying along with the wind at his back into the now choppy waters of Bantry Bay. I couldn’t hope to keep up with him as he pushed the surfski downwind, but when I did finally catch him the grin across his face said it all – he was having an absolute blast. 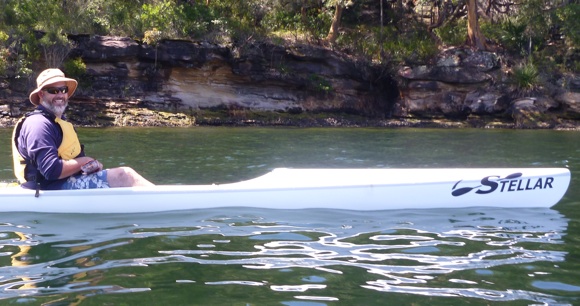 To add to the excitement of the day, on our return to Roseville back in our respective boats I was finally thrown from the ski by some boat wake and had the joy of trying to remount to the snickering of Tom nearby. I got to put the bullet venturi to the test and watched with a smile as the full cockpit slowly drained of water as I tentatively paddled away. And then at the end of the paddle, Tom and I got to share a laugh about the day before going our separate ways.

To say we were an odd couple on the water would be an understatement. On one hand, we had a boat constructed in an ancient fashion, with a timber frame lashed together and its skin stitched in over the top. On the other hand, a vacuum-bagged composite ski designed for speed. And yet on the water we were just two paddling mates having a bit of fun. I may be paddling a surfski now, but I’ll always paddle for the friendship and good times. Cheers, FP

Glassy paddles at The Spit

3 thoughts on “Traditional Paddles and Skin on Frame Kayaks”