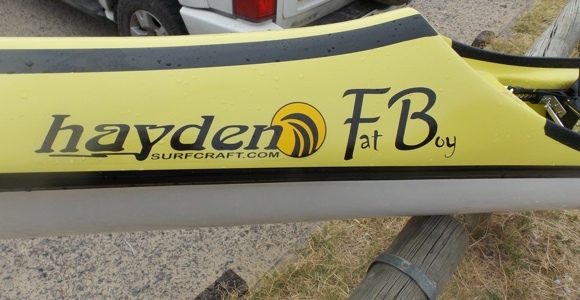 The Hayden Fat Boy spec surfski – suitable named for the paddlers and visitors to this site!

This week Brian Partridge, a South Australian member of Team Fat Paddler, got curious about the differences between ocean surfskis and spec surfskis. He was able to get his hands on a unique craft from Hayden, suitable named the “Fat Boy”, which is a wider version of their PR2 spec ski. His thoughts on the Fat Boy are below – Cheers, FP.

I was sitting at working considering my paddling options. Due to work commitments I’m only home every 3rd weekend, which makes life difficult for participating in every local ocean race on the calendar. So what about SLSC ski racing? Oh yeah I forgot, tippy spec skis, they’re all the same…

The Hayden Fat Boy was dropped off to my place by local paddling identity, and owner of Paddle Sports SA, Steve Dalton. This is the demo model that Steve has, and he was interested in knowing what I thought of it. Obviously he has more than enough expert opinions, and was looking for someone with less balance to critique it.  The Fat Boy is not aimed at the elite or intermediate paddler, it’s aimed at the beginner paddler who finds the standard spec ski just a little too tippy. And lets face it, like most beginners, I struggle badly in my ocean surfski going out through surf or facing side chop. 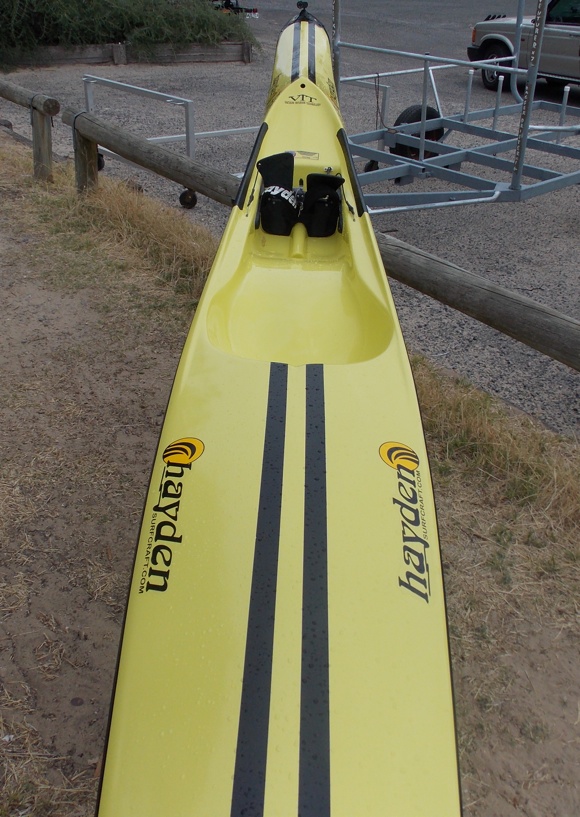 The Hayden Fat Boy spec surfski – skinny at the nose, fat in the arse

When I first saw the Hayden Fat Boy, the most distinct feature was how narrow the nose looked.  Everything is pretty much the same as the PR2 apart from it being roughly 51cm wide, 3cm wider than the standard PR2, with the widest point just behind the seat.  It’s quite obvious as the ski shape from above is like a diamond, as opposed to my Epic V10S ocean surfski, which has quite a smooth slow curve from the bow  to the stern. 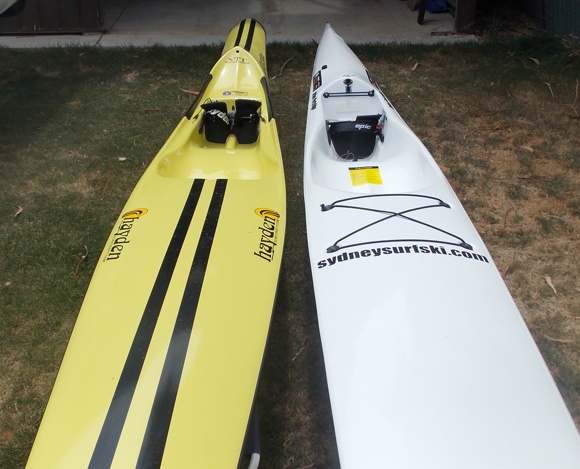 In the cockpit the Fat Boy has a single footwell with an adjustable foot plate. I prefer a single footwell, as other members of my family can also enjoy a day out on the ski. The footplate and pedals are large, grippy in bare feet and comfortable. The adjustment is done by a lever system, making it easy and fast to change position. 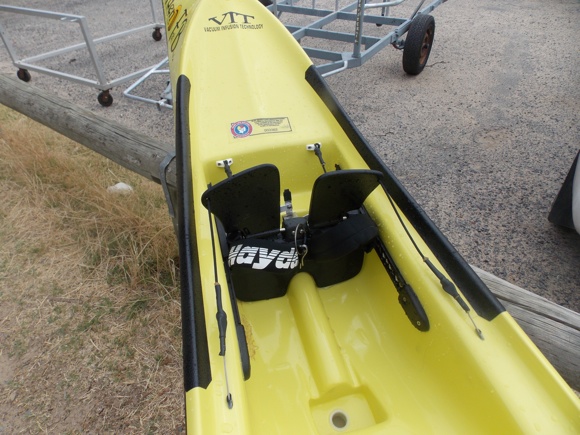 The Hayden Fat Boy footplate – large, grippy, easy to use

Now, being a member of TEAM FAT PADDLER, the need to run around in the shower to get wet doesn’t exist for me –  I’m 6′ tall and 105kgs. I only just managed to squeeze into the bucket, which feels tightish at the hips, narrow at the knees, and shallow at the back of the seat.  However, we need to remember that this is a spec ski, designed for SLSC racing, not for long distance endurance racing. The cockpit is small so it collects as little water as possible, and the drain in the floor is huge and very effective. 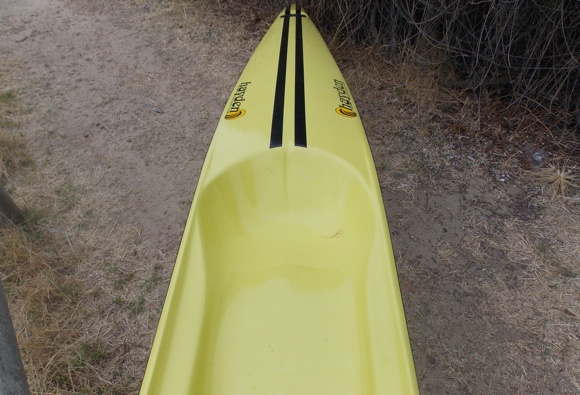 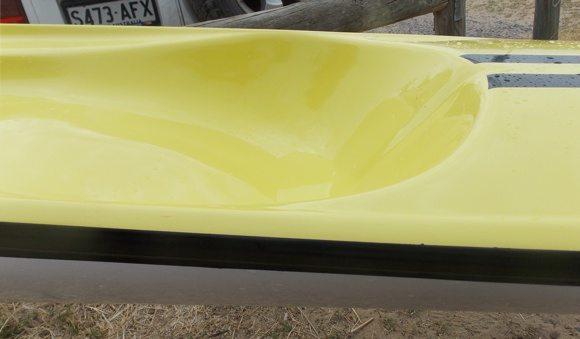 The Fat Boy has great primary and secondary stability, which surprised me as I felt I was sitting higher than normal. In terms of flat water speed there were no real surprises – I found it faster than my Epic V8 and slower than my Epic V10 Sport.  Mathematically that’s where it should be, as with its length and width, it fits right between these two ocean surfskis.

The million dollar question was how would it handle surf and rough water? To find out I paddled  through the surf at my local river mouth, where the waves were big and dumping close to shore. This is definitely what I fear the most in ski paddling, but the Fat Boy rode over the top of each wave easily and without fault. I got out the back first time with only one little wobble as I turned around, so no real dramas there. And then came the best surprise… the PR2 Fat Boy absolutely jumped out of its skin to catch the first wave back in. 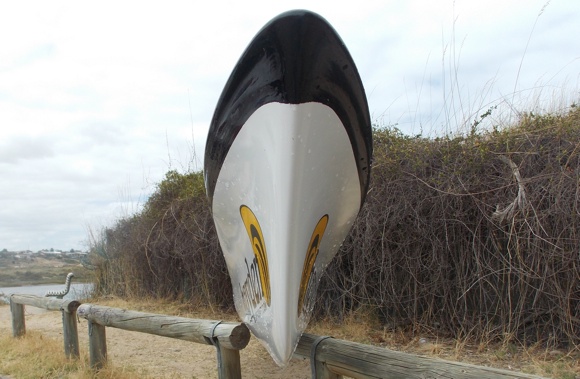 In the surf the Fat Boy did everything you want and need a surfski to do; accelerate quickly, catch waves effortlessly and stay straight and responsive on the wave face. Unlike some of the ocean surfskis I’ve paddled where the length and lack of rocker make it hard work to straighten up on the wave face, I didn’t find that at all on this ski. It had just the right amount of rocker to make it steerable down a wave. I loved it!! I went back and faced my fears of the surf zone time and time again.

I had hoped that the Hayden Fat Boy would be a miracle surfski, one to replace the four different surfskis I already have, but unfortunately it’s probably not. Primarily this is a spec ski, and as such, probably wont be a first choice for flat water distance races, such as the Hawkesbury Classic and Murray Marathon. But is that what Hayden set out to design? I dont think so. The Fat Boy is designed as a stable spec ski that tries not to sacrifice speed or quality whilst maintaining its PR2 pedigree in the surf. They haven’t tried to re-invent the wheel…  it’s a fun spec-ski, 5.8m and 18kg, approved by the SLSA board, that even the bigger fellas and beginners can paddle.

Surfski Comparison: The Fat Boy next to Brian’s Epic V10S

So if you’re a large unit and you really want a spec ski, and you find the standard spec skis too tippy, this IS the ski for you. And for that matter, me too. Cheers, Brian

Fully adjustable seat and foot well unit with a sliding foot plate operated by a cantilever for ease of adjustment, and self-adjusting rudder control cables. It has 23cm of movement and will accommodate paddlers with an inside leg measurement of 71-94cm. The seat sits just 30mm off the hull to give maximum stability, combined with generous width and built in tailbone relief.