So came the message from Don Kiesling, an avid surfskier from the US with numerous races under his belt including Molokai. He was far better known to me as a member of the extreme kayak tribe from the US West Coast, the Tsunami Rangers. These kayak surfers and rock gardeners have been a major influence on my paddling for some time, so I was ecstatic and nervous to be able to meet up for some fun on the water. 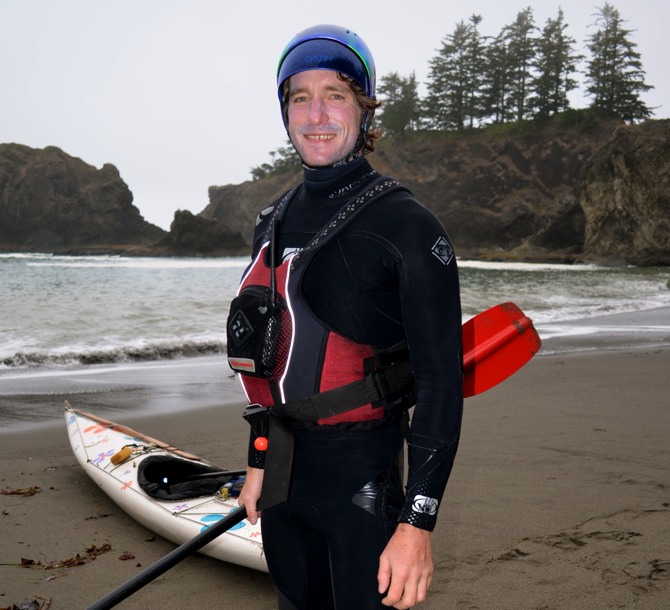 Don as I expected to see him…. wetsuit, helmet, and ready for rocks! (Photo credit: Jim Kakuk)

As luck would have it, Sydney’s constant swell of the previous 2 months died away to a mere 0.7M (ie flat), so there was no chance to get Don out for a surf. Instead, we opted for a leisurely paddle on Sydney Harbour where I’d show him some of our favourite paddling spots including Gelo Cliffs and Middle Head.

I’d spent some time well over a year ago with Captain Jim Kakuk of the Tsunami Rangers, who’d introduced Team Fat Paddler to rock gardening, so I had some expectation as to Don’s skill level. And because Don is an avid fan of the surfski, I was able to lend him my wife’s ski for the day to see what he could do with it. 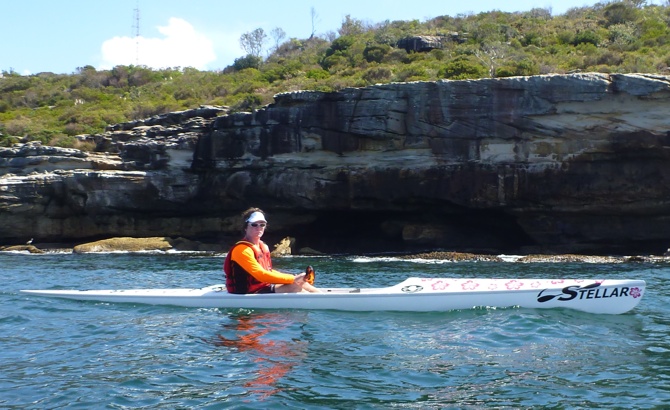 When we finally met up, I was surprised at how much he looked like a surfski paddler. I know that sounds weird but in my head I was expecting the uniform of a Ranger – a battered wetsuit and a scratched and painted surf helmet. Instead Don appeared in a high-viz paddlers top, sun visor, white sunglasses and a face covered in sunblock. He looked like your classic pro-surfskier.

Kicking back and relaxing at Chowder Bay (Sydney Harbour)

It didn’t take long to discover just how much he was in tune with the water. You can tell someone who loves to surf and catch runs because, mid conversation, we’d both suddenly shut-up, change direction and accelerate hard as we felt any lumps, ferry chop or random swell suddenly shift the waters around us. Then one or both of us would be off, accelerating hard as the lumps lifted the sterns of our skis and pushed us faster across the Harbour.

Most of the paddle was generally calm and relaxing, with two strangers chatting and sharing their love of the ocean together. But there were a couple of incidents that opened my eyes a little to the skill of the paddler beside me. 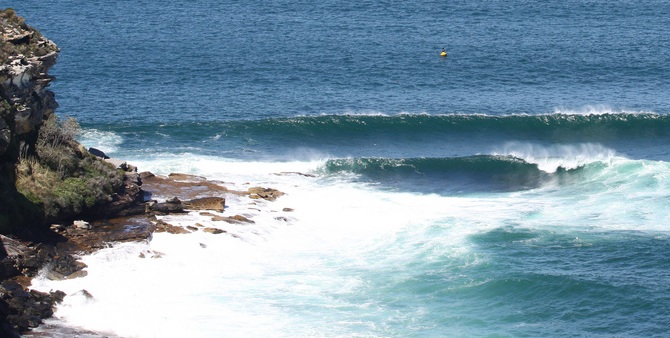 Dobroyd Point with an Easterly swell

The Dobroyd “Bowl” with a southerly swell. Cliffs just to left of shot.

Firstly, we rounded the point at Dobroyd where I explained how, with a decent southerly swell coming into the Harbour, a brilliant barreling bombora wave would jack up, suck almost dry on the rock platform below before smashing into the cliffs at the point. I had only heard of a few people surfing the point, including local iron man Guy Leech, but I’d never tried it before. In fact Leechie once told me a story of how he smashed a surfski into a thousand pieces surfing that particular break.

As we were chatting, a few waves rolled into the point. Nothing too big, possibly even ferry wake, but with low tide upon us the waves jacked up and formed a bowl around the shallow rock platform below. Without a word, we’d both taken off and dropped down the wave, pulling hard lefts to get out as the waves barreled behind us onto the rocks below.

I circled around and caught another wave into the point. It was a weird wave that seemed only inches deep in the pit, but with a fat shoulder that you had to drive the nose of the ski through to take the left. I was discovering how weak I was on that side (too much fun surfing the big RIGHT at the Bower and not enough left-handers!) but somehow managed to punch the ski out of the bowl before hitting the rocks.

I turned and waited to watch Don come back through. Watching the waves suck up on the rocks I started to feel a few nerves as I thought about the hell I’d be in, trying to explain to my wife how I’d let a Tsunami Ranger surf her ski straight into a rock platform. I’d actually told her I’d give Don my ski instead, yet here he was paddling into the point on her pretty, pink hibiscus covered Stellar SR, dropping hard into the bowl before pulling a skillful left to shoot out of the pit to safety. In fact as he did so, with the wave barreling behind him making it look like he was shooting out of the tube,  I had possibly the best surfski photo I’d ever get to take… had I’d had the damn camera in my hands!

Don dropping into the bowl. Look at the rock platform just inches under water…

We surfed a few more of these baby waves into the point, carefully avoiding the rocks below and then, having failed to get a photo as good as the earlier one would have been, we moved onto Gelo Cliffs where I pointed out the various areas we’d managed to spill Team Fat Paddler blood on our various adventures there.

The next spot where I saw Don’s skill was coming back around the notorious Middle Head on our return trip. A couple of big boats and ferries had gone past and some chunky waves rushed in both from behind and from the right. I watched in awe as Don accelerated hard and took off, flying across the face of Middle Harbour on a good chunk of water, with only the top of his head visible and a spray of water thrown up behind him. I of course, whilst watching his skill on the surfski, had not noticed the set of ferry wake that hit from the side, stuffing up all my momentum and throwing me around like a cork. It took a good 20 seconds to get up enough momentum to catch some chop and race across the water to catch up with Don who was now just cruising a few hundred metres away.

Don and the Sydney city backdrop. A tough place to paddle!

After that the paddle was a gentle cruise, ending up on little Manly Beach before we ducked into Manly wharf for a cleansing beer together. Chatting like old mates, we shared a laugh and a story or two before going our own separate ways.

Paddling is an amazing way of life, connecting us to like-minded people from all over the planet. Don is a skillful paddler and a good all round bloke, so I felt honoured to have met him & been able to paddle with him so far from his US home. Gotta love the paddling community! Cheers, FP 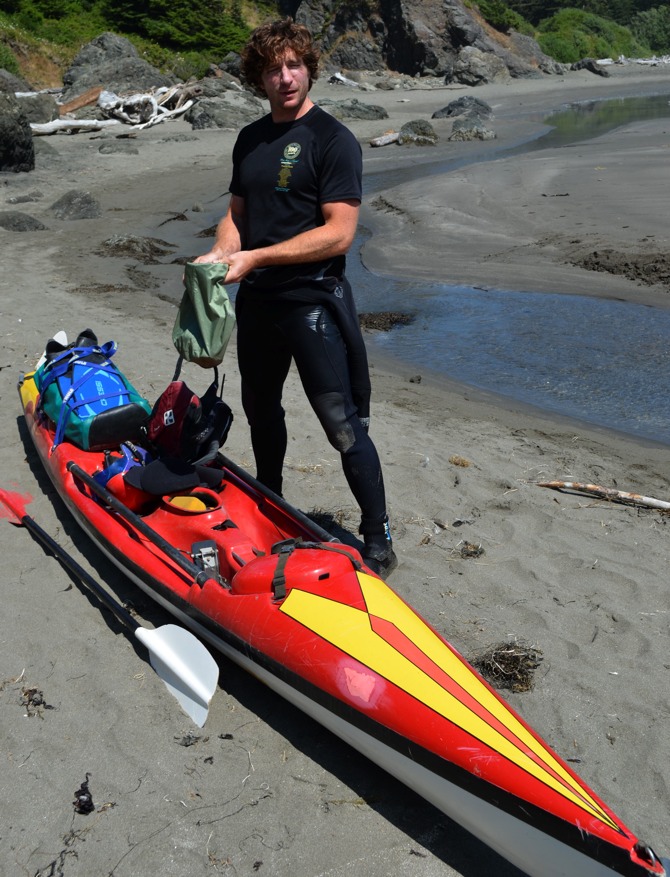