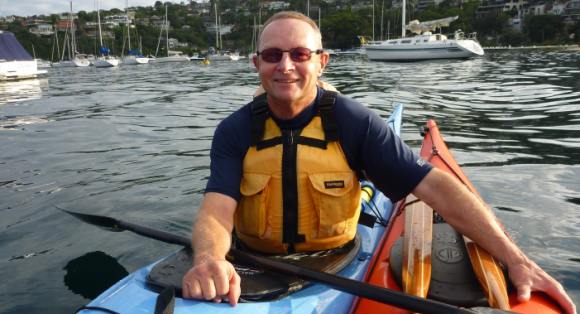 It never ceases to amaze me the way things happen. Like today’s paddle, which started out solo and ended up with a long social paddle with a stranger and a great breakfast by the Harbour. Here’s how it happened!

I’ve recently returned from a family holiday in Brisbane that had limited my time on the water, and I was dying to get out on our beautiful Sydney Harbour.  I also have my mother Avis staying with me this week, a couragous woman who is coming up on 5 years of remission from a nasty battle with cancer.  When I announced I was going to be paddling from The Spit, she asked to come along to spend some time on the beach relaxing and to do Tai Chi.

After leaving mum at the Spit, I set off for Grotto Point, hoping to catch the early light on the ocean through Sydney Heads. Not far away a small group of sea kayakers deviated in course for me and as they approached a nice fella introduced himself and announced he was an avid reader of the site.  The other two kayakers, a pair of very skillful women in rudderless kayaks, continued on their way to Sydney Harbour Kayaks to take part in guide training. So I rafted up with this fella for an early morning chat.

Introducing himself as Tim, we had a nice chat about paddling before he had to head off to follow his friends on their tour.  Then I set off again and paddled out past Grotto Point, enjoying the morning sun reflecting on the ocean through the Heads. 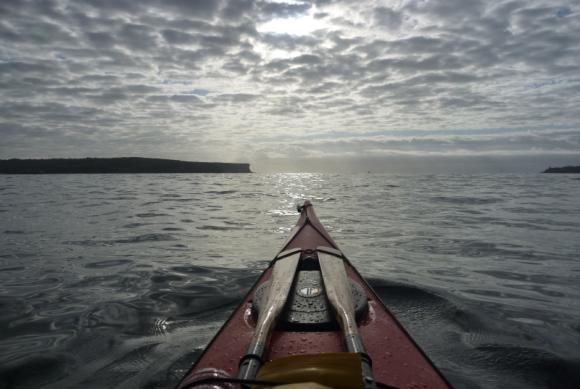 Mottled skies over Sydney Heads. A great way to start the day!

On the trip back I did a little gentle rock gardening along the Harbour cliffs thinking about Tim. He was somewhat familiar. I searched my paddling memories trying to place him when it started to dawn on me. Could he be the famous “Unknown Greenland Paddler“, a person I’d had an encounter with early in my paddling that inspired me to learn more about Greenland paddles? The thought was intriguing, but unlikely. But somehow I knew I’d seen him somewhere before.

Whilst thinking about this, I came across Tim again without his friends. When I enquired what was happening, he laughed and said he’d been kicked off the tour and was now paddling solo. So we decided to head off together up Middle Harbour  in search of the coffee boat.

Then whilst chatting about paddling, Tim mentioned that he had a Mitchell Horizon Greenland paddle at home.  Now this was too much of a coincidence, so I asked him outright if he remembered a fat bloke in an orange sit-on-top kayak under the Sydney Harbour Bridge asking him for a photo. And then it clicked for him too – yes, he IS the (formerly) Unknown Greenland Paddler!

Now even more perplexing was the fact he was now using a euro paddle, so I asked him why he’d apparently given up on his GP. He wasn’t really sure, other than perhaps pressure from other paddler colleagues. So I pulled out my split Mitchel Horizon and offered it to him for the rest of the day, an offer he gladly accepted.

Tim Kennings (in a familiar pose!) with my split Mitchell Horizon GP

For the rest of the morning we gently cruised around Middle Harbour, enjoying coffee from the Coffee Boat, muesli bars from Tim’s onboard stash, and swapping funny paddling stories. Here was a genuine, down to earth and funny bloke who, like me, just loved paddling. And from what I could see, an extremely skilled paddler unlike me – haha! 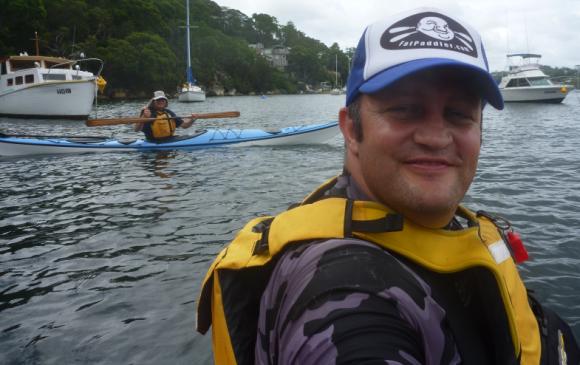 After a final dash back to The Spit, Tim then decided to try out the GP for some rolling. I have to admit I did start to giggle as he didn’t quite get the first attempt, or the second, or even the third before he pulled the pin and did a wet-exit. But after swapping back over to his euro paddle, I was astounded when he did a wet re-entry (upside down) and rolled back upright! Sensational manouver! A subsequent roll after emptying the boat was then done with ease, and I knew that it was my turn to make an attempt – and nervously I might add, after having not attempted one for about 4 weeks and now in the presence of such a skillful paddler! Still, the first one worked an absolute treat and I popped straight up. The second one was a little uglier admittedly, but at 2 for 2 I suggested we head in for coffee and breakfast with my mum at the café at The Spit. 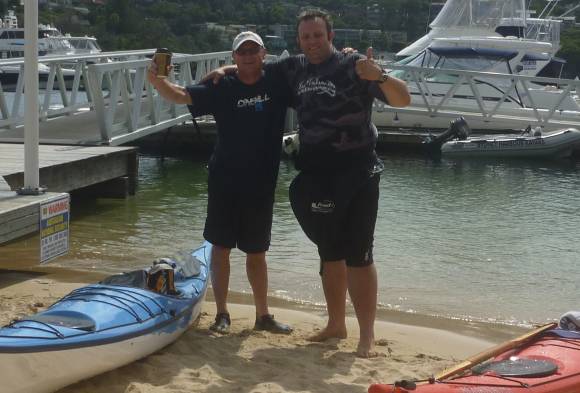 Wet and happy after a brilliant morning paddle session

Over coffee Tim and my mum got on famously, and with an egg and bacon roll now firmly placed in my stomach (courtesy of Tim who insisted on buying breakfast), I reflected on a brilliant morning’s paddle with such good company. How had I gone from a solo paddle to this?? Who cares I thought, life’s good! 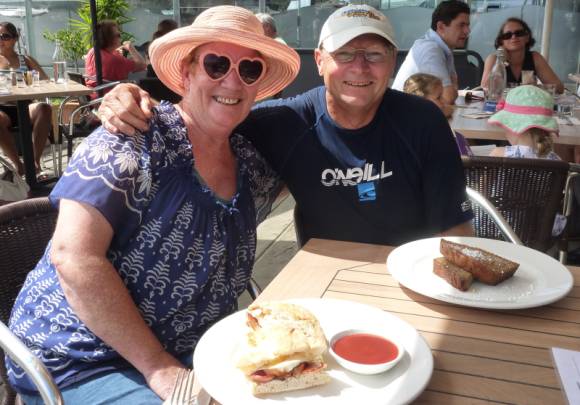 Oi Timbo, that's my MOTHER you're getting friendly with!

Many thanks for the paddle Tim, it was an absolute pleasure to meet you, thanks for breakfast, and looking forward to another paddle again sometime soon. Cheers! – FP

7 thoughts on “Making friends on the water – Tim Kennings”