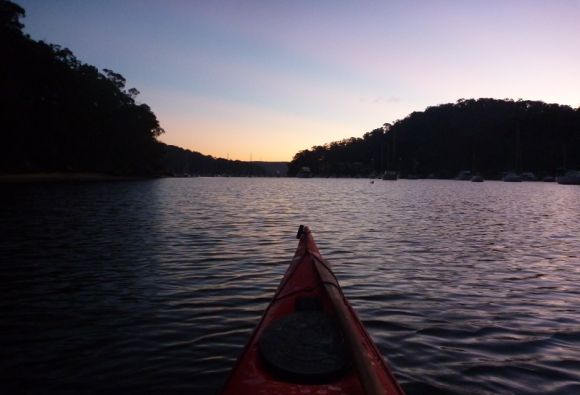 The weekend had been exciting for Grumm. He had permission from the Minister for War & Finance to buy a kayak, and with the Sydney Harbour Kayaks ex-rental sale on, was keen to get into a nice composite Boréal Design Narwhal. However, with his son’s first football game on, I’d offered to go as his proxy, and returned with a completely different boat for him. Instead of a nice cruisy stable ruddered boat, I had bought him a kayak that was 10cm narrower, 30cm longer, with hard chines and a skeg. I’d got him an immaculate Boréal Design Labrador, knowing that once he was used to it he’d thank me for the more technical boat. And in the meantime, I’d get to laugh at him regularly falling out of it!

To my great annoyance however, on the test run he hadn’t fallen out even once. And as it turned out, the boat is an absolutely flying machine that I couldn’t remotely keep up with. Unless he had to turn of course, which he simply couldn’t do, since I hadn’t shown him how to edge and the boats complete lack of rocker meant it tracked as straight as an arrow!

The next day, since he’d proven he could actually stay upright in the boat, we left home at 5am for Pittwater, a 10km stretch of water leading to the mouth of the Hawkesbury River.  Grumm wanted to see his first kayak-borne sunrise, so I figured this was as good a place as any to do so. I’d also invited Timbo along for the journey, and with darkness slowly draining away we pushed off into the inky waters of Pittwater. 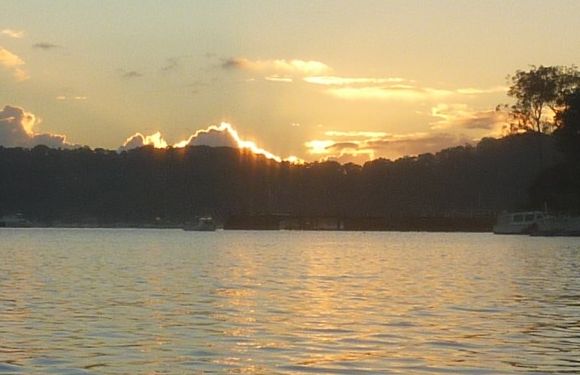 Every cloud has a silver lining. Or golden even!

Immediately Grumm set a cracking pace in his ridiculously fast boat. I was determined to tip him out though, so time and again I’d race up his slip stream, edge the nose of my Aquanaut alongside his stern, and then smash a hard turn to port against the back of his boat. This would immediately spin him around sideways, although I just couldn’t seem to get him to fall out. Of course once sideways it would take him 5 mins and about a 400 metre turning circle to get his boat facing the right way again, which gave me ample time to get some distance on him before he would inevitably catch-up. Then I’d do it all again – haha!

After a few kilometres of these games, we passed by Scotland Island and paused as the sun finally poked up over the horizon, bathing us all in golden light. Grumm raced ahead for the prime position to finally get his paddling sunrise. 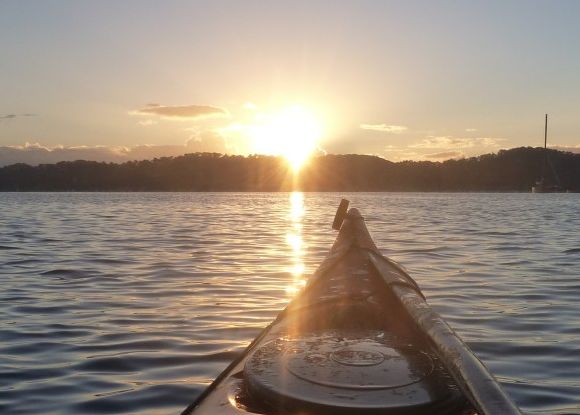 The FP view of the sunrise. Beautiful.

Grumm gets pole position for his first sunrise. 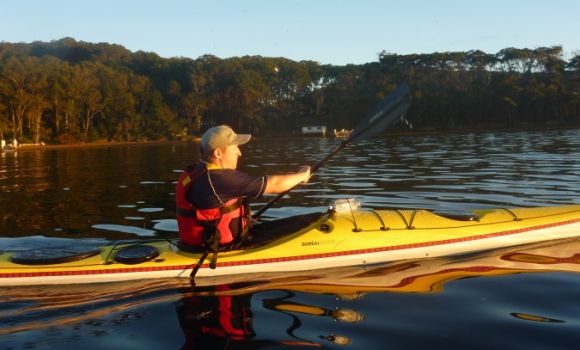 Once we had that out the way we recommenced our northwards paddle up Pittwater, pausing occasionally to enjoy the national park wilderness on its western shores. For me, this meant a little rock-gardening whilst Timbo and Grumm took a wide-berth in their composite boats (yay for my plastic Aquanaut!). Eventually Tim got annoyed with missing out on all the fun, so pulled out his goggles and started to practice some rolls.

Timbo being a clown as usual. Nice rolls though!

By this stage we’d come about 6-7 km, with Timbo and I catching the odd boat-wake for a little sloppy surfing. But Grumm’s boat started to slow down, and we realised all the paddling over the past two days was wearing him out.  So we decided to pull into Mackerel Beach, a quaint little holiday village accessible only by boat. 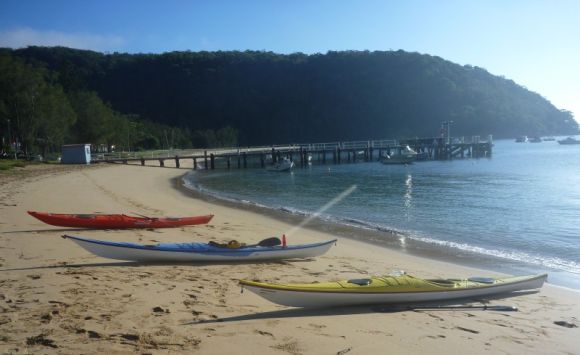 Time to relax at Mackerel Beach

Now relaxing on the beach, we were joined by a lovely lady who had ridden her bike down to the water’s edge. Our chat inevitably turned to coffee and we asked if she knew of somewhere to get one. She responded that she was actually off to get a few cups of Sydney’s best coffee – at a café on the otherside of Pittwater! And at that, she pulled out an old ski and paddle and set off for the 2km paddle across the water. 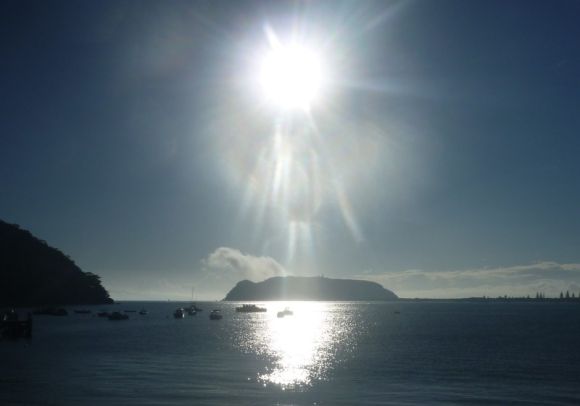 Coffee... over there somewhere apparently.

Looking at Grumm however it was clear we wouldn’t be making the extra trip for Sydney’s best coffee. In his whiniest Brit accent, he complained about his sore shoulders and Timbo and I could see we’d have to get him back the last 7 kms via the most direct route possible.  Even though his whinging was a little tiresome, his slow pace allowed us to take in the fog that was rolling into Pittwater, a magnificent sight as it crept into the watery basin. 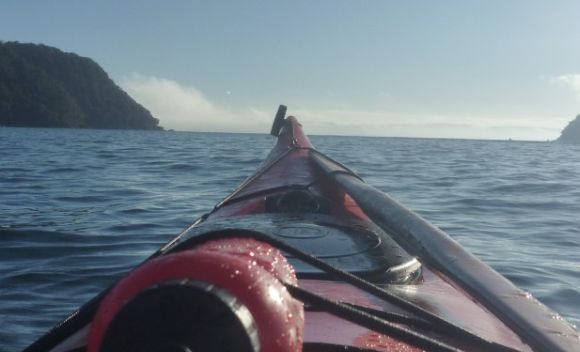 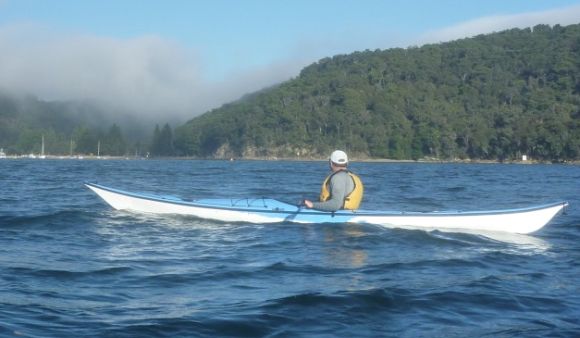 Timbo watching the fog rolling in through the valleys

Still in a playful mood, I was taking the long route back by playing in all the rock-gardens along the water’s edge. Dodging amongst the rocks, I was giving my Adanac Paddle a good workout as I zoomed through little gauntlets,  with water sliding in and out of the rocky formations.  Then, much to Timbo’s amusement, whilst a good 15 metres into a particularly shallow rock garden, I got stuck. Not a little stuck,  but quite seriously stuck, so to the sounds of Tim’s laughter I slowly pushed off the rocks and carefully reversed out, trying not to think of the new scratches I’d most likely added to my hull. On a bright note, at least I hadn’t broken my Greenland paddle! 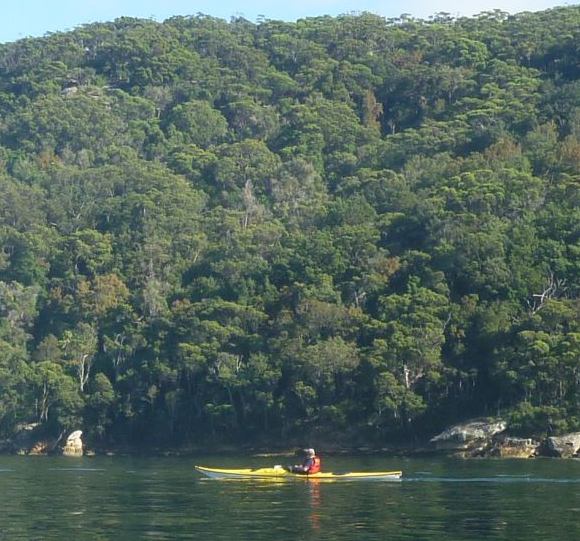 Grumm slowly paddling back, safely far away from any shallow rock-gardens

As Grumm’s whining got worse, Timbo took over distraction duties and coached Grumm on paddle technique and edging. It didn’t shut him up for long, but at least it gave him the chance to pick up a few skills! Then finally, we pulled into McCarrs Creek, our put-in point and the end of Grumm’s journey. I was disappointed still that he hadn’t fallen out, but with a few oyster beds to watch our for at the landing point, I thought my best chance was about to come. And wouldn’t you know it, Grumm had already flipped over on exit and taken a bath before I could get the camera primed for the shot!

Grumm trying to disguise the fact he's just fallen in and is now dripping wet!

The final verdict on the morning was that Grumm’s boat is a rocket, sunrises are great, and poms whinge a lot. Oh, and watch out for the depth of rock-gardens!! Cheers – FP

5 thoughts on “Another Pittwater Dawn and Grumm Gets a Rocket”