After spending most of the week pushed to the limit of my ability in large swells on one hand and headwinds on the other, opening the curtain the morning of the Mauritius Ocean Classic this year I was greeted with still, blue skies. The roar of the surf on the reef was less than at any stage in the previous five days. 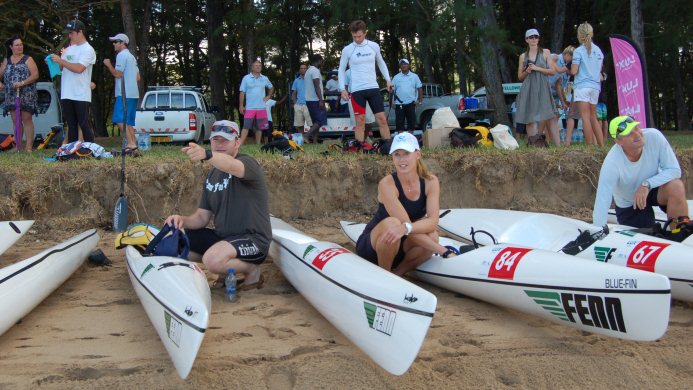 Nat pointing out to Kassie something that was obviously very important, like “it’s flat”.

Sancho – yep, it looked flat for the race start.

I was quietly stoked – I knew there’d be some runners, but there’d be no paddle gripping pass exits or entrances – just a leisurely 20kms with a light downwind. 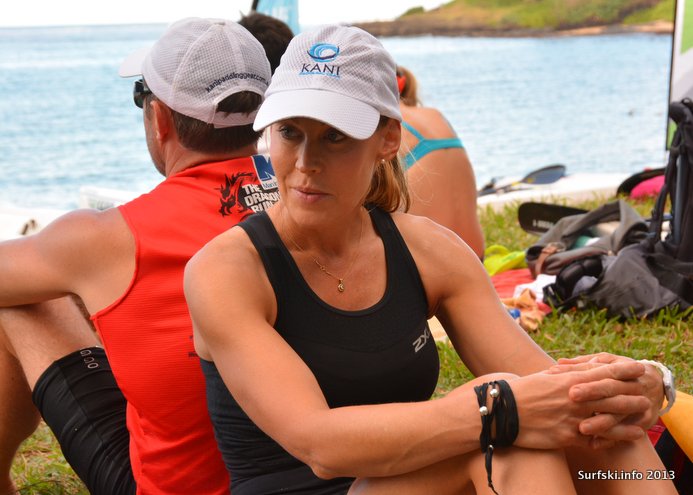 There were plenty of new paddlers at this year’s race and it appears the topic on their minds is always the same –“Will I know where the Le Morne pass is?” I reassured more than one paddler that morning that if all else failed, use the final safety boat as the marker and head in from there. 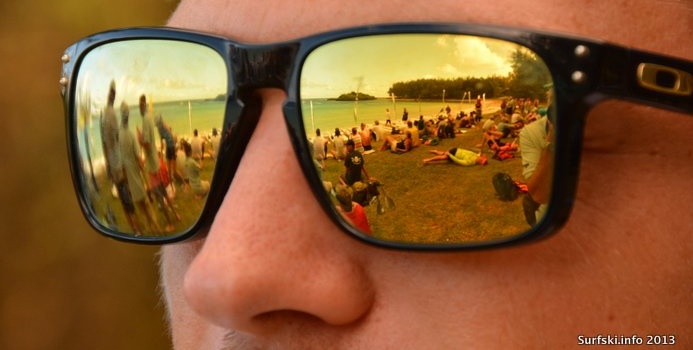 We set off to Sancho in the buses from the resort with the skis having being sent down earlier in the morning. Even the nervous paddlers were reassured by what greeted us – Sancho was flat. But to help with the nerves, we all sat around chatting for the next couple of hours until the race start time.

Once called to the water for the start, we were all away quickly and the field sorted itself out. In fine TFP form, I was second last off the beach and right at the back of the pack at the start, but pulled up a few places in the first kilometre. In what proved to be a bit of an omen, I managed to catch a fisherman’s pot line in the middle of the ocean and stop dead. Paddling backwards to get off the line, the back markers went past me again. 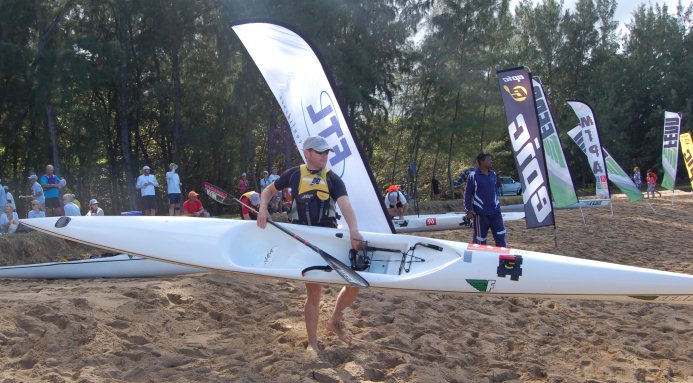 Nat heads to the water for the race start.

I was a bit pissed off, and dug deep and started catching and linking a few runners and made up the places again and then settled in with two other paddlers, one a first time Aussie paddler and a veteran from South Africa. It proved to be a good grouping as the Aussie was almost metronome like in his ability to keep pace and the South African a little more canny and picking up the runs. I fell somewhere in between for a about 30 minutes but then pulled away as they went wide and out to sea and I stayed closer to the reef.

And the front of the pack powers away…. (Img credit: Rob Mousley)

It was fun and I managed to link more runs than I ever have and was paddling with a big smile on my face. But then it came unstuck. Not taking my own advice and those of the race directors, I thought I was hard on the right hand entrance to the Le Morne pass. It was low tide and the surf was small and I could see exposed reef, but knew if I was heading through the pass, there’d be deep, or deeper, water in the middle. Turns out I got it wrong, very wrong.

Getting through the Le Morne pass, even on a small day is “fun” for the inexperienced.

I paddled hard between a set wave and then caught the back of the wave in front and then everything unraveled very quickly. I surfed the small breaker and found myself surrounded by coral in three inches of water and stuck fast. The noise from the rear of the ski suggested I’d probably ripped it to pieces. 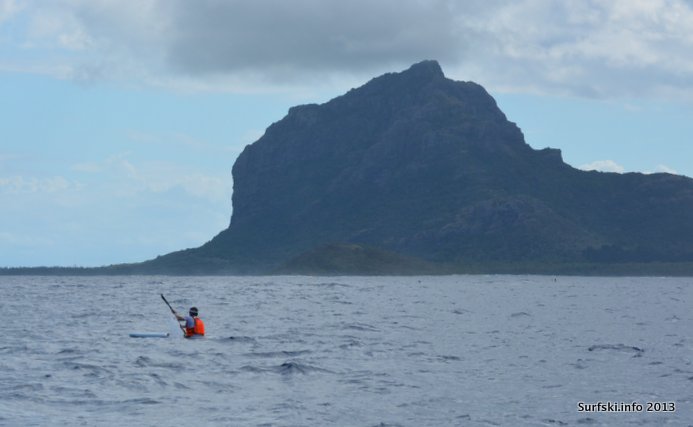 Twenty minutes of hilarity then ensued as I attempted to find a way off the reef with a rudder wedged firmly in one spot, despite my attempts to straighten it, paddling canoe style and the inevitable walk and drag that left me bleeding and missing a bit of skin. 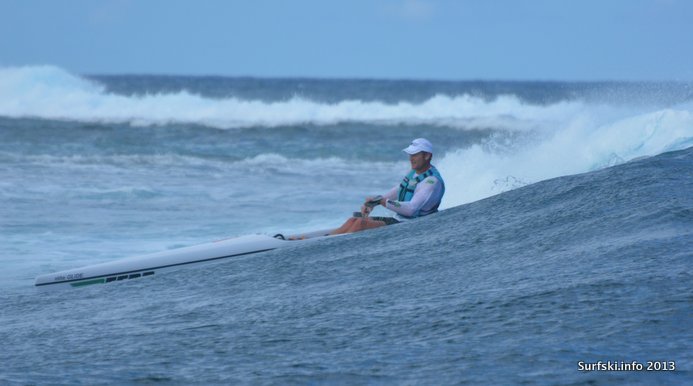 Finally into deep water and actually in the channel, I tried paddling my crippled ski for about another kilometre before calling it quits at Le Morne beach, much to the amusement of the kite surfers amassed there, and then picked up my paddle and jogged to the finish line 2 kms away, bleeding and wheezing all the way. 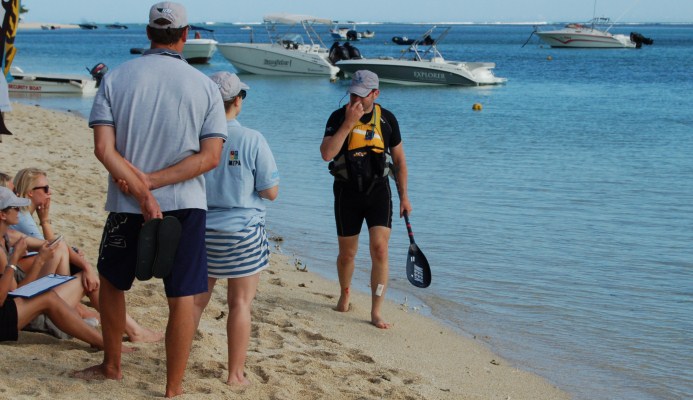 Not how I thought I’d finish, jogging over the line after leaving a broken ski 2kms away

I had enough time to explain where I’d left my ski, inspect my scratches and cool down in the crystal clear waters at the finish line as fellow TFP member and race newbie (first race of any kind, ever) Kassie James crossed the finish to big cheers from the crowd. After only four months of paddling, her top 10 finish in the women’s division has her craving further paddling challenges – she’s even talking about Molokai – yep, she’s a nutter. 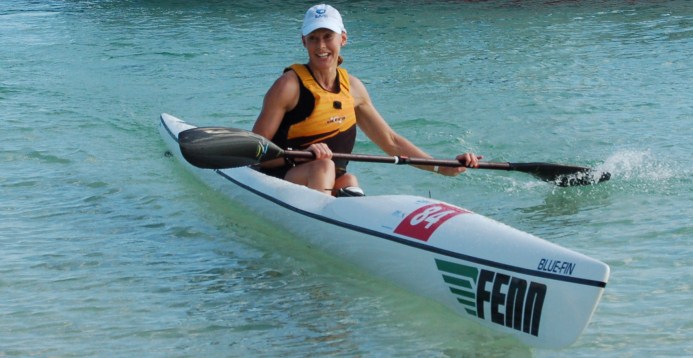 TFP rookie Kassie James finishing in the top 10 women in her first ever surf ski race.

The top places were taken out by the pros, and by all accounts Dawid’s win this year was a masterful effort, opening a big gap off the back of two good runs and then just destroying the field with that advantage for the rest of the race. 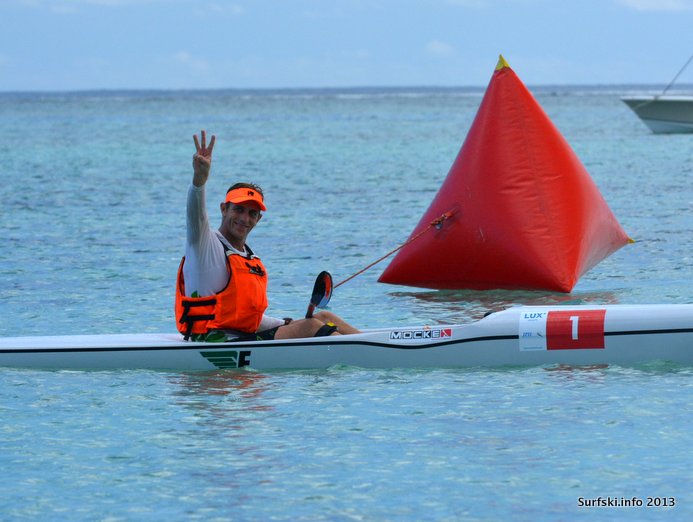 But this race is special for the exceptional way it is organized and the way less experienced and novice paddlers are made to feel part of the event. The Sporty’s relay innovation this year was fantastic. And as always, the support and efforts of Team Fenn, Domenic Henry’s JPH Boathouse, LUX Sports and Above & Beyond Travel and the extremely tolerant staff at Tamassa Resort made the week a pleasure.

New friendships forged, old friendships with paddlers from interstate and overseas reignited, and plans made for next year. I know Team Fat Paddler are talking about attacking in force in 2014 and new paddling friends from South Australia also keen. I’ll be counting the days until I can get back. Cheers, Nat

Note: Special thanks to Rob Mousley from surfski.info for the kind use of his photos. He’s a pretty decent bloke for a South African…  😉