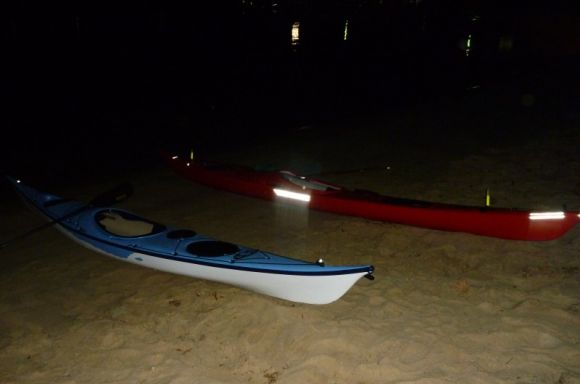 Kayaks prepped and ready to set off into the darkness

There is something magical about paddling at night. The lights of civilisation reflecting off inky water,  the incredible array of stars overhead, and the tension of not being able to see what is in the water below all add up to an exhilarating experience. For my mate Tim, it was something he’d never done before, so I convinced him to come along for the experience.

As we pushed off from The Spit, the first thing we noticed was our old friend “Ouchie”, seemingly non-plussed at our invasion of his night-time sleeping spot. We manouvered our boats over him for a better look, before paddling off into the darkness of Middle Harbour. 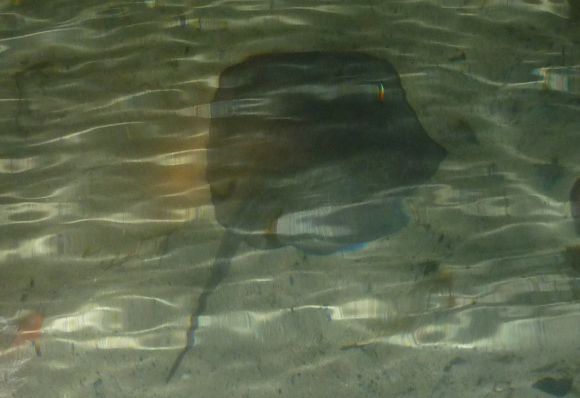 Ouchie the stingray cruising along underneath us

I could tell that Tim was tense as he tried to make jokes about fishies with big teeth beneath us. Paddling at night, you simply cannot see what is in the water around you, and it is a fair fear for us knowing that we have Bull Sharks and the odd Hammerhead in these waters. To help put his mind at ease, I quietly hummed the theme to JAWS as I paddled. He pretended to be amused.

Once we passed under the The Spit Bridge and into Middle Harbour proper, the real beauty of paddling in the dark became apparent. Tim was mesmerised by the beauty of lights reflecting off the water, of the Harbour-side mansions lit up with flood lights, and of the odd party going on already at the early stages of the evening.

Once we paddled past the houses we found ourselves heading towards Bantry Bay in almost complete darkness. With only the distant twinkling lights of cruisers in Bantry Bay to guide us, we could lie back on our boats and stare up at the stars, now looking spectacularly bright above us.

There were very few boats on the water, but occasionally we’d hear a motor boat speeding towards us. I had cyalumes taped to the stern and bow, and Timbo had some small marine lights on his boat, but strapped to my deck were two powerful waterproof torches which I’d turn on at the faintest hint of a motor to make sure we were clearly lit up. They were also within easy reach in case I needed to shine them towards any boats heading our way. 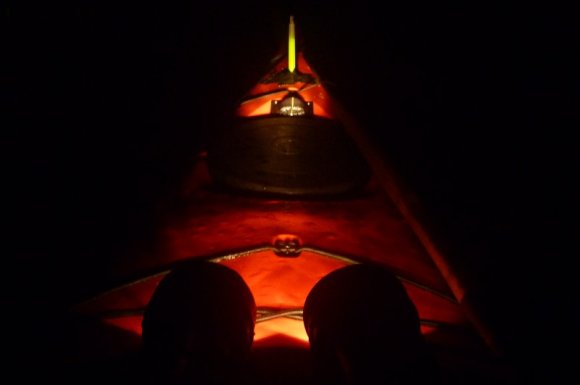 The kayak's front deck lit up by my headlights

Without being able to see movement in the water, your feel for your kayak becomes far more intuitive as you adjust and balance purely on  feel alone. This becomes a little more nerve-racking when there are waves about as you can’t see them coming to be able to prepare to brace. As a speeding cruiser passed us, we knew there was the inevitable bow wave streaking out towards us, and as we paddled we barely had a seconds notice before the waves caught us. With a sudden burst of paddling, I felt the stern lift up and then I was off, surfing the wave in the dark purely by feel and loving the incredible sense of speed as I sliced through the black water.

As I started to drop off the wave, I turned to look for Timbo. As I did he too latched onto a wave and I had the incredible view of his boat seemingly flying across the water with a churning wave rolling along behind him. When he finished his wave, he looked both excited and relieved that he’d kept his boat upright for his first night-time surf.

From there we continued a very cruisy pace up towards Bantry Bay, heading for a small landing spot known as Flat Rock Beach. At this part of the harbour we had only the flashing red lights of distant channel markers to guide us, as the hills and water were now completely shrouded in darkness. As we approached the beach however the water came to life around us, as fish skipped alongside us and from time to time directly into the sides of the kayaks.

We eventually found the right approach into Flat Rock Beach and slowly drifted in across it’s very shallow shores.  Then we hopped out of our kayaks and wandered up the beach, taking in the sounds of the bushland and the beauty of the starry sky as I unloaded my dry-bag. Then sitting on a rock, I unpacked the Trangia and put the kettle on. 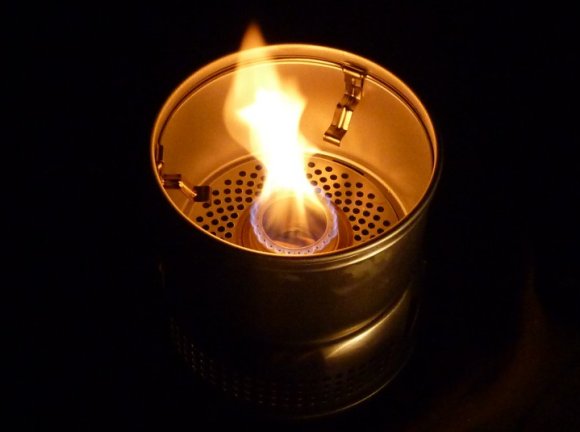 The orange glow of the Trangia at night.

Now with a hot steaming cups of coffee, and a few muesli bars, we sat on the beach and enjoyed the vision of stars and lights reflecting off the water.  Timbo was almost speechless at the beauty of being on the water at night but quietly moaned about all the wasted nights he could have spent in his boat.

Once we finished the coffee we packed up the Trangia and started the gentle paddle back to The Spit. Once underway Timbo started laughing at the reflective tape lighting up my boat like a Christmas tree under his torchlight, but I got my revenge by firing off the camera in his direction blinding him with the flash. Despite our amusement, the boats looked incredible as they slid quietly through the darkness.

Timbo - a splash of colour in the black night

As we neared civilisation again we could hear the raucous laughter of parties going on in waterfront houses. As we silently slipped past we chuckled at the drunken revelry going on in the houses above us, oblivious to the two paddlers cruising below. Houses were lit up with disco lights and strobes as Saturday night in Sydney got properly underway. 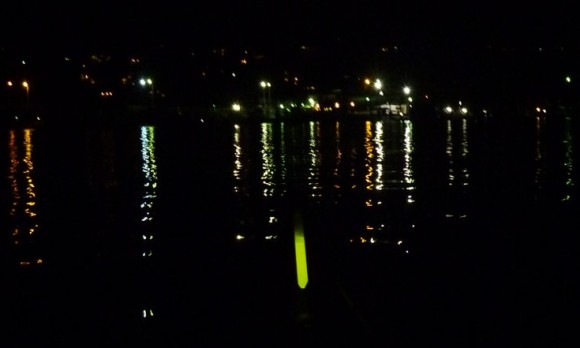 Finally we made our way under The Spit Bridge and back into the beach we’re we’d launched. Once out of our boats, we turned to check the waters for Ouchie, who as expected was waiting for us in the shallows. Not that he was quite so keen on having my torch shone in his eyes, so he turned his barbed-tail and slowly cruised off into deeper waters. Sticking the camera into the water I managed to capture one final photo him as he swam away from us. 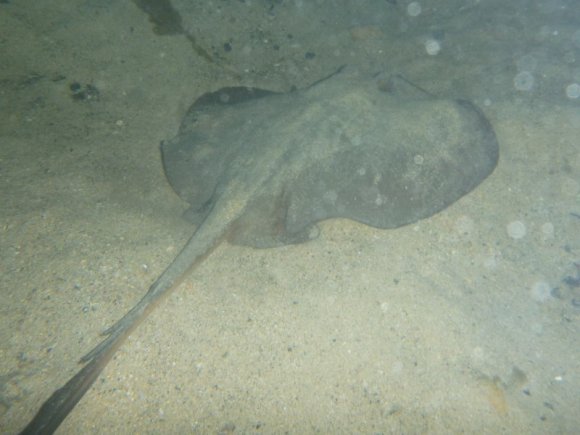 With that we packed our boats away and each head off for home and a warm bed after the nights beautiful paddle.  Tim will no doubt be up for more night paddles, and I can’t recommend it enough to paddlers looking to experience something a little different. Cheers – FP