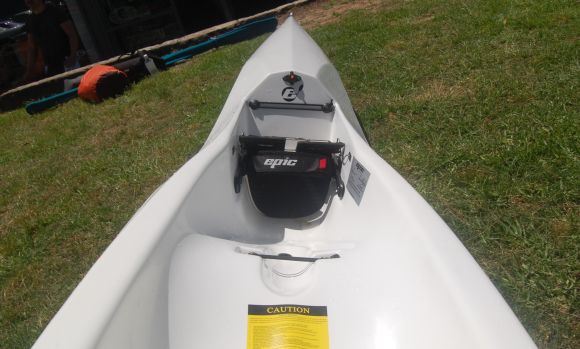 So I was pretty excited to read about the new Epic V8 Ocean Ski, specifically designed with stability in mind to help new participants take up this exciting form of paddling. Epic CEO Greg Barton had the ski designed on the Epic 18X Sport sea kayak (which Freya Hoffmeister recently paddled around Autralia), utilising the swede-form hull (extra width behind the cockpit for more stability) and the Epic V12 bow with cutaways for better paddling technique.

Epic V8 Swede-form shape – sleek at the nose, wide at the hips! 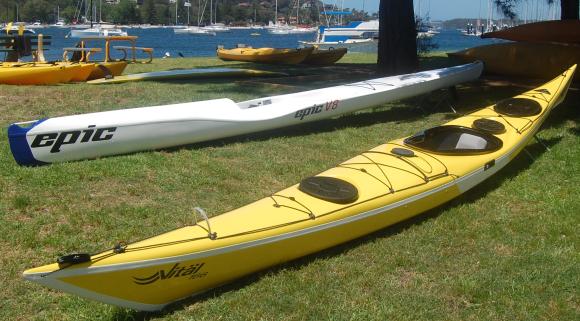 The V8 is a bit shorter than your normal ski at 5.48m (18 feet) long, and at about 56cm (22″) wide is probably a faction skinnier than many sea kayaks. The stock fibreglass model comes in around 16kg so its a piece of cake to hoist on the car, even for smaller paddlers. 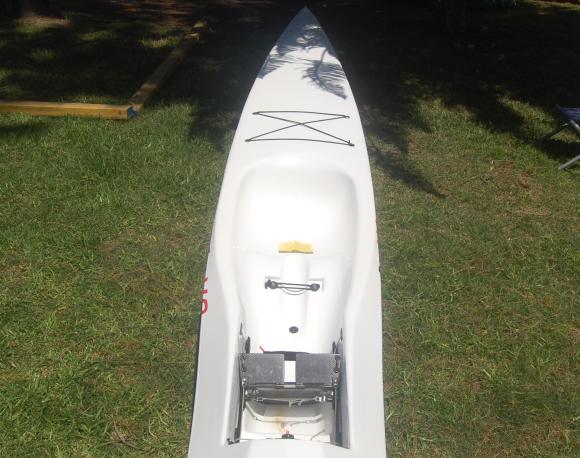 Despite a few nerves, I was keen to get this baby out on the water for a test paddle, and if necessary, a bit of a swim. I chose a Euro paddle for my intial test run (H2O Crystal-X), eased my big bum into the deep and narrow seat, and tentatively brought my legs up into the ski. Then with only the slightest of wobbles I was away, paddling along the beach at the The Spit (in case I fell in!) before turning out into the channel and into a very nasty wind. Not only was this thing capable of speed, but even in the wind and chop I was able to stay on fairly easily!

I did a few laps fairly close in to the The Spit before deciding to swap out the paddle and try the Epic V8 with my Adanac Greenland paddle – a paddle that very few would think to couple with a ski! I like to use a pretty high angle with my Greenland paddle, and with the cutaways in the hull I was able to maintain a fantastic high angle rotational stroke (well, it felt fantastic… technique is likely to be another matter entirely!). Now I was starting to really enjoy myself, as I combined the joy of the stick with the speed of the ski.

As I paddled a noticed a few things. The Epic V8  is still a little tippy compared to a sea kayak, but if a hefty lump like me can keep it upright, anyone should be able to. My weight did lower the ski somewhat and I found a fair bit of water would settle into the cockpit around my feet, but this was hardly a bother and more of an observation. As a paddler of skeg boats, I had real problems coming to terms with the rudder, and kept finding myself taking corrective strokes to steer! Once I eventually got the hang of the pedals, I was able to steer the boat quite easily by feet alone. 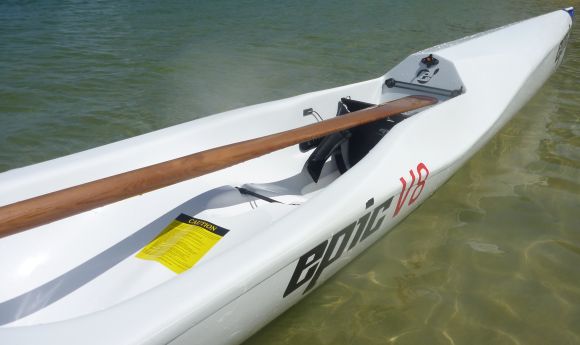 Epic V8 Ocean Ski with a Greenland paddle. A trend unlikely to take off!

When I finally returned the V8 to the beach, I only really had one comment – Epic is going to sell a million of them. This fast performance boat coupled with brilliant stability is going to open up ski paddling to a whole new audience – it will turbo-charge the sport by easing the barriers to entry for everyday people.

I couldn’t help but think this would be an absolutely awesome boat for marathon events like the Hawkesbury Canoe Classic, with the additional stability being a real asset over long exhausting sessions on the paddle. It’s light, fast, and easy to ride – an incredibly sexy combination. I’d happily add one to my collection (if the Minister for War and Finance permitted it).

Sydney Harbour Kayaks now has one sitting with its hire fleet on the beach at The Spit, so anyone can come along and give this great new craft a test paddle any day of the week. If you’ve been thinking about skis but been worried you’re too fat, weak, old, or just hopeless – this is the one to try! And if you do, write to me and let me know how you found it! Cheers – FP

UPDATE (29 July 2012): Well, it looks like I was correct, the V8 proved incredibly popular as an entry-level surfski and Epic DID sell a million of these (give or take)! Now other manufacturers have joined in with entry level boats of their own, including the Think Eze, the Carbonology Zest, the Stellar SR and the very exciting (and just released in Australia) Stellar S18S. Happy days for new surfski-wannabies!

UPDATE (March 2013): Epic have updated the design of the V8 and released what we’re calling Series 2. See what Team Fat Paddler member Brian Partridge thinks of the new design.